The Travis County Commissioners Court has just given official approval for a package of tax incentives designed to secure Apple's commitment to expand its Austin, Texas campus and add over 3,600 new jobs at the site. The approval comes after development officials expressed concern last week that the deal was "in peril" as concerns over loopholes in the contract delayed approval by the county. 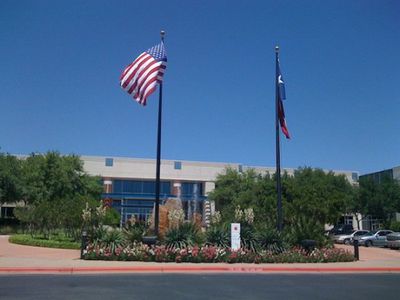 Apple's campus in Austin, Texas (Source: Flickr/The Pug Father)
Prior to today's meeting of the Commissioners Court, the Austin American-Statesman reported on some of the tweaks to the contract, including language requiring Apple to pay the lowest-salaried 10% of its new employees at the site an average of $35,000 per year. Contractors, which may comprise up to 25% of the new hires, will be paid a minimum of $11 per hour.

Apple governmental affairs representative Jason Lundgaard was on hand for the session and answered several questions for the county commissioners.

Travis County is the final governmental entity to approve its portion of the total tax incentive plan, which is estimated to yield $35-36 million for Apple in exchange for adding the jobs and facilities. The State of Texas and the City of Austin previously approved their pieces of the deal.

Mattie Num Nums
11 bucks an hour. People at In n Out flipping burgers start at 10.
Score: 16 Votes (Like | Disagree)

rjohnstone
Apple got a sweet deal out of that one.
$35 million in tax breaks for creating low level tech jobs.
It will take decades for the City/County/State to break even on the deal.
Score: 10 Votes (Like | Disagree)

Glad they got that figured out. I was worried that apple might not be able to survive without the $35 million government subsidy.
Score: 8 Votes (Like | Disagree)

Obviously mister Forbes is very concerned that people may demand that he and those like him paid more in taxes.

You are simply wrong. The Forbes flat tax plan and even the Ryan budget already passed in the house, reduces marginal rates but substantially reduces deductions. That increases the net cash payments of the very richest (top 20% not merely top 1%), and provides more net revenue to the government which is mandated to be applied to deficits and debt, not new spending.

The advantage to less debt and deficits is less money flowing to government bonds and more flowing to commercial bonds which is the exact source of employment and growth and wage increases. It really is that simple!

It is this exact cause that we are seeing lower wages, employment, and growth. The government sucking all the cash out of the bond market. A really big and hurtful sucking sound to real people. Side effect? Currency debasement and zero or less rate of return on savings. High gas and grocery prices.

This is real stuff.

BTW - it isn't being anti apple, its being realistic.. they have more money than god at the moment. They don't need incentives, just use their own hoard of money.

Average pay of $35,000? Low paying jobs.. sure it'll help the local economy. But ultimately, its like Apple ( or any other company ) have the attitude that they are doing the local area a favour by creating new jobs.
Score: 6 Votes (Like | Disagree)
Read All Comments