While AT&T's activations and sales can not quite be directly compared because activations includes used devices being reactivated on new accounts, AT&T has told us that this is a small difference. Consequently, AT&T's 4.3 million iPhone activations likely corresponds to approximately 75% of its total smartphone sales of 5.5 million units for the quarter. 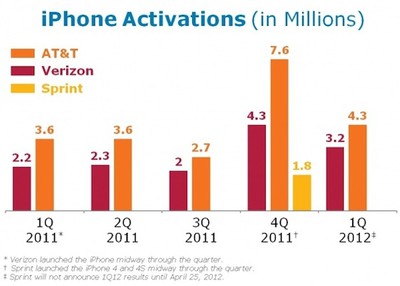 The significant drop in iPhone activations for AT&T combined with the significant drop at Verizon are weighing on Apple's stock this morning, with the already-weakened share price down another $10 as trading opens for the day. But while investors appear nervous about Apple's iPhone sales numbers for the quarter, the primary driver will be international sales as Apple increased distribution during the quarter. China is by far the largest component to that equation, with the iPhone 4S not only having launched on China Unicom early in the quarter but also having been added by China Telecom in early March.

Apple will report its quarterly financial results after the close of trading today, at approximately 4:30 PM Eastern Time.

Popeye206
Funny.... it's still a gain from normal quarters, but investors only see the dip from the holidays. :rolleyes:
Score: 16 Votes (Like | Disagree)

Hastings101
I guess I don't see the big deal, why wouldn't sales be down compared to a holiday quarter?
Score: 9 Votes (Like | Disagree)

MadDog31
Looks higher than it's been in the last year with exception to the obvious holiday quarter, and of course there's going to be a drop after having a massive quarter like that. Look for the same pattern this year.

Yr Blues
a few years ago smart phones were novel, now everyone's on their second or third one. people are getting bored and the global economy is not what it used to be. unless there's a revolutionary new iphone  and not just a minor upgrade  people will be less likely to care.
Score: 7 Votes (Like | Disagree)

lord patton
AT&T iPhone "activations" down 43%, but Verizon's were down only 25%. I wonder why?
Score: 6 Votes (Like | Disagree)
Read All Comments