Back in late February, we noted that Apple had begun selling Brazilian-assembled 8 GB iPhone 4 models in that country, yielding the first fruits from Foxconn's production lines starting up in the country. Foxconn has also been said to be gearing up for iPad production in Brazil, with domestic production of the iPhone and iPad providing a means by which Apple could avoid hefty import taxes in one of the world's most populous countries.

While Apple has yet to begin selling Brazilian-assembled versions of the iPhone 4S or even give any sign that it intends to do so, MacRumors has learned that Apple has been making better progress with the iPad. Specifically, the company has already received certification to sell Brazilian-assembled models of the 16 GB iPad 2 in Brazil alongside the current Chinese-assembled models. Apple already sells the full line of iPad 2 models in Brazil, but only the 16 GB models will continue to be available once the new iPad launches and it appears that Apple will be adding domestically-assembled models to the mix at that time. 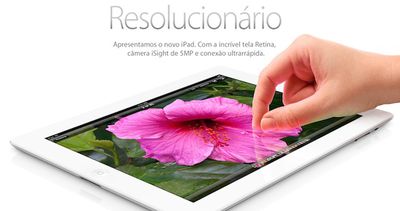 As with the iPhone, Chinese-assembled versions of iPad models manufactured for sale in Brazil would carry the BZ/A suffix on their model numbers as seen with most Apple products in that market, while their Brazilian-assembled counterparts would carry a BR/A suffix.

Moonjumper
More national diversity in manufacturing should add stability to Apple's options, which is also good for us as consumers, as we have seen the problems when one area gets flooded and the world gets hard drive shortages.
Score: 3 Votes (Like | Disagree)

I swear I still don't see the point in that factory. Apple isn't likely going to reduce the price of the iPads produced here, just as they haven't reduced the price of the iPhones, so for the consumer it doesn't really make a difference (actually, the only difference it could make is in quality, as I wouldn't be surprised if quality control is far worse here than in China). It's going to increase Apple's profit per unit sold, since the money the consumers paid that went to fuel taxes is now going to Apple, but the cost of building a new factory here was likely very high (and all our politicians ought to have asked for very high bribes in order to allow for Apple's factory to be build). All the security measures taken in China to prevent leaks simply don't exist here. And production is likely going to be limited to a few products, given the bureaucracy required in order to make stuff here.

Why did Apple even bother with that factory?


Brazil and the US have major long-standing issues regarding immigration and trade. It is very hard to obtain work permission in Brazil for US citizens, and likewise here for Brazilians. This is called "reciprocity", (principle that favours, benefits, or penalties that are granted by one state to the citizens or legal entities of another, should be returned in kind). Who started it? Not sure... And being in Brazil, you probably are aware of all this.

So in regard to trade between the US and Brazil, things are and have been quite tense. In order for Apple to access that market, and not have huge import taxes, they must create a plant there and make their products there.
Large populations such as China and Brazil can take this kind of stand, because they know they can. The US does the same thing, and in fact we most likely invented that attitude here.

So why does Apple even bother with Brazil?
Brazil has the fastest growing affluent population in our hemisphere, & is the 5th most populated country in the World, everyone there wants Apple products, - so Apple had to make a deal to access that market. As far as security goes? You won't find plants there creating new products..., only products that have been out for a while and torn apart by technicians already...

I sincerely hope that the price comes down for Brazil, as I have many Brazilian friends who are sick with the high prices there for many things. I think that it has to become reasonable over time. Apple is a very smart company in it's pricing strategies, and I don't think they want to risk looking like they are "gauging" the Brazil population.
Score: 2 Votes (Like | Disagree)

Just me, or does it seem like the apple products that are built in Brazil seems like they will be of High Quality/Better Built? I Sure think so.


Not at all... I'm sorry to say this, but my experience with Brazilian products hasn't been good.
Score: 2 Votes (Like | Disagree)

Just me, or does it seem like the apple products that are built in Brazil seems like they will be of High Quality/Better Built? I Sure think so.

Designed by Apple in California Assembled in Brazil

Discaciate
CNet has published a very good article about the brazilian Foxconn factories: