iOS developer David Smith has been posting iOS version stats for his Universal app Audiobooks [Direct Link]. Smith gets about 100,000 weekly downloads to both his paid and free versions and believes it is a statistically meaningful data set.

With the launch of iOS 5.1 on March 7th, 2012, Smith has been tracking the adoption rate which he suspected would be faster than in the past due to the availability of over the air (OTA) iOS updates. Indeed, after only 5 days after its initial release, Smith found that 50% of his OTA-eligible customers were already at iOS 5.1. Now, after 15 days, he's found that 77% of OTA-eligible iOS customers have upgraded to the latest version.

When he backs out to include all versions of iOS, including versions such as iOS 3 and iOS 4 which don't offer OTA updates, he finds total adoption at 61% in 15 days. 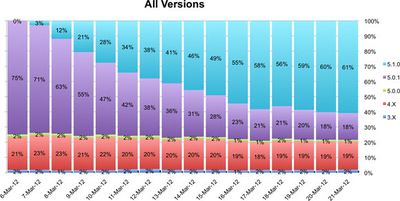 This seems to represent a significant boost in adoption for OTA-eligible upgraders.

While we don't have directly comparable numbers, it took iOS 4.0 one month to hit 50% usage by web traffic. Unfortunately, the numbers aren't entirely interchangeable, as there they are from different data sets (app usage vs web usage), but gives you an idea of the scale. If anything, factors should have contributed to a faster uptake for iOS 4 than would have been expected as it was a major new feature release (vs 5.1) at the time and was included in the successful iPhone 4 launch.

As Smith points out, this is the same level of adoption Android currently sees for Gingerbread (v2.3) which was launched much earlier (mid/late 2011). Meanwhile, the latest version of Android (Ice Cream Sandwidth/v4.0) is only at ~1.6% adoption after about 5 months.

Apple introduced "over-the-air" iOS updates as of iOS 5.0 -- allowing users to upgrade without connecting their device to a computer. They've since deployed two different upgrades (5.01 and 5.1) to users.

bushido
so many people i know are still on iOS 4.1 or something with a billion app updates waiting to be installed. it always baffles my mind why it doesnt bother them ^^
Score: 30 Votes (Like | Disagree)

is this over-the-air updates that have made the difference? What do people think?


Unlike some competitor's phone OS offerings, it probably helps that iOS updates are, at the very least, available.

Android Ice Cream Sandwich is on how many phones? 2%?

Unlike other companies, Apple's latest iOS update was universally available to all users on its debut day. No buts or ifs or coming soon...in 6 months.
Score: 10 Votes (Like | Disagree)

I know some people do seem to be lazy when it comes to updating, but don't forget some devices (old devices) can't update past a certain version.

The first-generation iPod touch can't be updated past iOS 3.1.3

And if someone replies with a "get a newer model" comment, you're better be prepared to send me one for free. :rolleyes:

Which device is stuck on iOS 2? :confused:
Score: 7 Votes (Like | Disagree)

Unlike some competitor's phone OS offerings, it probably helps that iOS updates are, at the very least, available.

Android Ice Cream Sandwich is on how many phones? 2%?


the way android approaches updates appears to be very disorganised and unclear.
Score: 6 Votes (Like | Disagree)

alksion
I'm still on 5.0.1 to keep my jailbreak!
Score: 5 Votes (Like | Disagree)
Read All Comments