Following the release of the third-generation Apple TV late last week, one forum member at XBMC.org has performed a teardown of the device, revealing a number of details about its internals.

As Apple notes on the tech specs page for the new Apple TV, the device utilizes a unique single-core A5 system-on-a-chip, an upgrade from the A4 package found in the previous generation but lacking the dual-core processor found in the A5 chip used in the iPad 2 and iPhone 4S. The Apple TV teardown reveals a typical-looking A5 chip at first glance, carrying date codes suggesting it was manufactured during the seventh week of 2012, or mid-February. 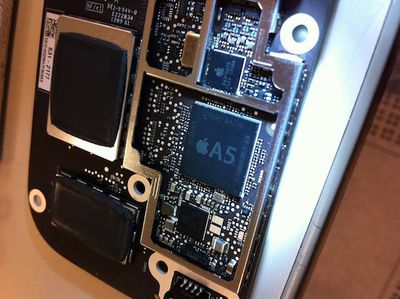 The processor inside the new Apple TV's A5 package is identified as APL2498, indicating a variation on the APL0498 processor found in the standard dual-core A5. The part number for the RAM included in the chip suggests that it is a 512 MB chip from Hynix, a boost from the 256 MB of RAM found in the A4 package on the previous-generation Apple TV.

As for flash storage, the format of the part number stamped on the chip implies that it is an 8 GB part from Toshiba, meaning that the device carries the same storage capacity as found in the previous-generation model. Given that the Apple TV is a streaming-only device, on-board storage is only required to support the operating system and buffering of streaming content.

There had been some speculation that Apple could boost the on-board storage in order to handle larger 1080p content supported on the updated model, but it appears that Apple still views 8 GB as sufficient given limited increases in file size for 1080p content. Maintaining 8 GB of on-board storage undoubtedly also helps Apple maintain the $99 pricing on the Apple TV given other improvements such as the A5 chip.

Finally, the new Apple TV appears to contain a second antenna that was not present in the previous-generation model, although it is unclear exactly how the new antenna is being used to improve performance.


I'm watching Netflix on my new one right now. Love it.
Score: 40 Votes (Like | Disagree)

David G.
I for one am amazed Apple can pack this much technology inside a box and still sell it for under 100 bucks.
Score: 27 Votes (Like | Disagree)

Millions enough for you?

Agreed, Netflix and playing tunes through it are just the two main reasons I bought it. AirPlay has made it and my iPad two pieces of tech I can't live without.
Score: 25 Votes (Like | Disagree)

AirPlay has made it and my iPad two pieces of tech I can't love without.