Enhanced Smart Cover with Rear Protection for iPad 3? Glass-Backed iPhone 5 in the Works?

iLounge shares a few items of interest from a "repeatedly reliable source" addressing the possibility of a new Smart Cover-inspired case for the iPad 3 and Apple's work on a new glass-backed design for the iPhone 5 due later this year.

The first claim addresses Apple's plans for protection of the iPad 3. While the current Smart Cover for the iPad 2 is said to still work with the iPad 3, Apple is said to be working on a case that incorporates a Smart Cover-like front panel with a rear shell providing protection for the entirety of the device.

Said to be similar to Incase’s Magazine Jacket (and a host of subsequent alternatives that have appeared for the iPad 2), this new case has a folding magnetized Smart Cover on the front, and a rear shell made from fiberglass covered with PU/bicast leather.

The report notes that it is unclear whether the new case will be for only the iPad 3 or if it will also be compatible with the iPad 2. 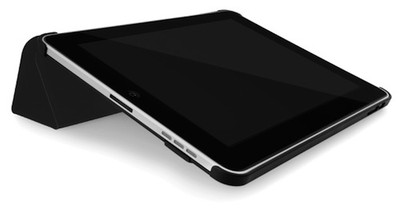 Incase's Magazine Jacket for original iPad
The source's second claim relates to the iPhone 5, which is rumored for release later this year. According to the report, Apple is planning to once again use a glass or ceramic material for the rear of the device, countering rumors of a switch back to a metal rear casing. By incorporating thinner Gorilla Glass from Corning, Apple will reportedly be able to make the iPhone even thinner.

Despite the well-established “aluminum-backed iPhone 5” rumors that have continued to circulate since the iPhone 4 was released, Apple is nonetheless continuing to experiment with glass and ceramic rear shells for a future iPhone model. The upshot is that the new design would be like the iPhone 4, but thinner, thanks to Corning’s stronger Gorilla Glass 2 and the further reduction of internal components.

The source also indicates that a larger display remains a possibility, while the company is indeed also looking to replace its 30-pin dock connector with a smaller connector.

iLounge has on occasion offered accurate information, and in particular the site's claims for the iPad 3 do appear to be bearing out as parts continue to surface ahead of the official unveiling.

Macrumors is talking like an iPad 3 exists. In all reality, there is no such thing as an iPad 3 seeing as Apple has not announced anything.


Then what do you envision them announcing on Wednesday?
Score: 24 Votes (Like | Disagree)

palmerc2
I don't give a damn about thinner. Just better!!
Score: 13 Votes (Like | Disagree)

basesloaded190
Not a whole lot longer until the iPhone rumors start barreling their way in!
Score: 12 Votes (Like | Disagree)

Not a whole lot longer until the iPhone rumors start barreling their way in!


Wednesday 3 hours after the keynote.
Score: 10 Votes (Like | Disagree)

Macrumors is talking like an iPad 3 exists. In all reality, there is no such thing as an iPad 3 seeing as Apple has not announced anything.


Think we're all pretty confident they'll be refreshing the iPad on Wednesday, as to what it's going to be called, that's not important right now.

It is a rumor site though! :D
Score: 9 Votes (Like | Disagree)
Read All Comments