As noted by CNET, Apple today updated its environmental site with updated data for 2011, revealing a few tidbits of new information about the company's work on energy usage and other topics. 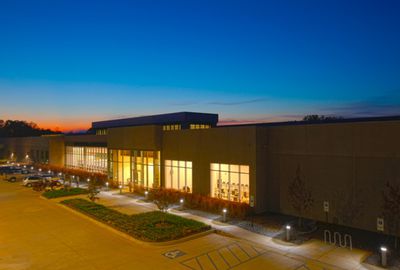 Apple's data center in Maiden, North Carolina
Among the additions is a brief discussion of the company's massive new data center in Maiden, North Carolina, which Apple touts as being the only such facility of comparable size to earn LEED Platinum certification. The company also notes that the solar farm being built across the street from the facility will be the largest user-owned solar array in the United States, registering at 20 megawatts. Finally, Apple will also be powering the facility with a 5-megawatt fuel cell installation, the largest in the country not owned by a utility company. Additional details are available in the company's facilities report (PDF).

Our new data center in Maiden, North Carolina, demonstrates our commitment to reducing the environmental impact of our facilities through energy-efficient, green building design. The facility has earned the coveted LEED Platinum certification from the U.S. Green Building Council. We know of no other data center of comparable size that has achieved this level of LEED certification. Our goal is to run the Maiden facility with high percentage renewable energy mix, and we have major projects under way to achieve this — including building the nation’s largest end user-owned solar array and building the largest nonutility fuel cell installation in the United States.

Still, rapid growth in the company's sales have caused Apple's carbon footprint to balloon, with greenhouse gas emissions increasing by 56% from 14.8 million metric tons in 2010 to 23.1 million metric tons in 2011. The biggest swings in terms of share of Apple's carbon footprint come from product use itself, which declined from 45% of the company's use to just 30%, and manufacturing, which increased from 45% to 61% between 2010 and 2011. But even with the rapid growth in carbon footprint, Apple touts that greenhouse gas emissions per dollar of revenue have decreased by 15.4 percent since 2008.

DTphonehome
Other companies doing this: none.
Other tech companies inviting the media into their factories: none.
Company getting all the flak: Apple.
Score: 28 Votes (Like | Disagree)

They may be trying to be more transparent, but they are still behind HP, Dell and Nokia according to Greenpeace's ratings:

Apple has certainly improved, but are more open about what they're doing than the 3 that are above them. It's shifted from 2007, but you can get that companies are now showing what they're doing now, so they ratings are lower than what they used to be.

HP I can understand being more green cause they sell more products that are recyclable. Ink cartridges are the biggest recycled product, because they include shipping envelopes with new cartridges and you can even request free ones that hold more than just 1 cartridge.
Score: 10 Votes (Like | Disagree)

Other companies doing this: none.
Other tech companies inviting the media into their factories: none.
Company getting all the flak: Apple.

pavelbure
They messed up and forgot something,

I ride a bike, sold the car. I only buy recyclable products. I am a major sponsor of the WWF organization. I profit from my power bill through my 10 solar panels on the roof (even through winter), I have 3 massive rain water tanks for filling the pool and gardening. All of my appliances have 3-5 star energy ratings. I have a big back yard full of trees and plants.

I do respect what you do though.

Nuclear station would be a great target for a suicide bomber and an extremely easy way to wipe out america in a couple of hours. Fault line or not. Earth quakes are not the only natural disaster than can occur. Nuclear is too risky. Plus you get nuclear wastage that has a half life of around 20,000 years.

I have to disagree with your last point...While I'm not a physicist, I do have some elementary knowledge of nuclear reactors, and they are quite different than nuclear or thermonuclear (hydrogen) warheads. (Not sure if you were implying that someone could initiate a nuclear detonation, but this isn't possible). Sure, a terrorists could somehow gain access to fissile (I guess, distinct from fissionable; maybe someone can explain the difference in further detail than what Wikipedia can provide) material or spent fuel rods and make a dirty bomb (conventional explosive wrapped in radioactive material, which, when detonated, spreads radiation everywhere), but the likelihood of this happening, I think, is slim. France relies on nuclear power for 75% of their electricity and we have a number of reactors that haven't (or at least we don't know) been subject to any planned attack. The Navy has been using reactors since 1958. And I think it would be far easier to access this material outside the United States.

These reactors are very secure and they're encased in massively thick concrete, steel, and lead enclosures. Of course, nuclear waste is a problem, but you can recycle spent Uranium 235 rods into usable Plutonium (I think France does this). You do still have to deal with the Plutonium, but maybe it's easier to contain than the tons of lead, mercury, arsenic, and other toxic materials released by burning coal and the coal ash itself (which is toxic, despite what the EPA says about it).

Sure, Japan should give us pause, but if we can implement thorough safety measures, then I think we have a pretty good chance of operating these things safely.