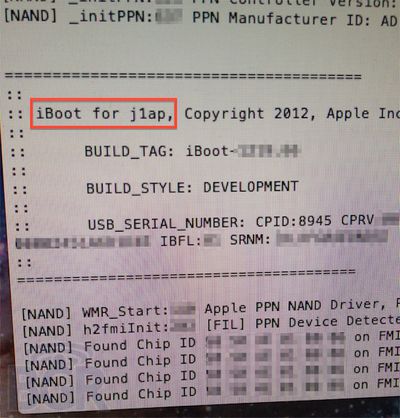 BGR reports that it has received from a source photos of what are claimed to be screenshots from Apple's iBoot development and debugging software for the bootrom showing details on an iPad 3. The screenshots, which show references to the known "J1" and "iPad3,1" code names, reveal that the device will indeed be using a new application processor carrying an S5L8945X identifier, presumably as part of a new A6 system-on-a-chip.

For starters, the model numbers are J1 and J2 (iPad3,1 and iPad3,2), and while DigiTimes reported this a few weeks ago, these two models are not different devices, just a single iPad available in two versions — one with Wi-Fi only and one with Wi-Fi and embedded GSM/CDMA/LTE for all carriers. Also included in the photos is, for the first time, confirmation of which processor Apple will be using in the iPad 3: an A6 processor with model number S5L8945X. For reference, the Apple A4 model was S5L8930X and the A5 is S5L8940X.

The report notes that the processor is expected to be of the quad-core variety, up from the current dual-core processor used in the A5 on the iPad 2 and iPhone 4S. The report also reiterates claims that the iPad will support LTE alongside GSM and CDMA 3G networks in a single device.

BGR offers no assessment of the reliability of the source of the photos, and iBoot output could be easily faked, but if legitimate the details bolster claims that the iPad 3 will be a major upgrade to the popular tablet device.

As it appears, this is not a retina display, unfortunately. I can literally see the pixels in the picture.

So I believe there are two possibilities:
1) The next-gen iPad won't have a higher resolution display and this info is correct
2) This is a second generation iPad and this debug software is fake

Errr it's not photos of an iPad's screen though...
Looks like photos of a Mac's screen.
Score: 24 Votes (Like | Disagree)

As it appears, this is not a retina display, unfortunately. I can literally see the pixels in the picture.

So I believe there are two possibilities:
1) The next-gen iPad won't have a higher resolution display and this info is correct
2) This is a second generation iPad and this debug software is fake

Am I going to pay my groceries with an iPad? It is better with the credit card!


I think you are confusing NFC with LTE.
Score: 7 Votes (Like | Disagree)

I didn't know that. When I saw the black border, I was thinking of the iPad.
If it's from a Mac, anything is possible.

1) There's nothing to substantiate LTE in this article. They are reporting old rumors.

2) The source claims to be in possession of an iPad 3 prototype. Why would we get pictures of code but not the prototype? If they say they have the prototype and are providing code, that's just as incriminating as the prototype.

A big question in my mind will be whether the A6 will be Cortex A-15 based or A-9 based.

All things being equal, Cortex A-15 is 40% faster than Cortex A-9... when you add 2 other dies on as well as I'm sure a faster GPU, the A6 could be one hell of a processor (though still 32-bit, as it is still ARM v7 instruction set based).

There's no reason to push for a change to ARM's 64 bit instruction set. Wider data paths are expensive, especially for mobile devices. They are especially helped by memory that is much faster than it was around 2002 when AMD was introducing their 64 bit architecture. You can get sufficient bandwidth without increasing data bus width. It's just too expensive overall where efficiency is the name of the game.
Score: 5 Votes (Like | Disagree)

Not impressed, I could fake that up too. It's a freaking TextEdit document on Lion.

iBoot? Seriously? I hope BGR didn't pay to much for these images, cause they got scammed.

As much as I would like for it to be real I'm going to call fakety fake fake fake, until we get to an actual Apple press event.


I hope you do understand that "iBoot" is the name of the iOS bootrom, which is in charge allowing the device to boot and initialized all the peripherials and some hardware components. They didn't just make this up.
Score: 5 Votes (Like | Disagree)
Read All Comments