With stock trading for January coming to a close today, Apple's performance for the first month of 2012 has been notable, with the company's stock riding strong earnings to a monthly gain of over 50 points that has increased its price by nearly 13%. Much of that gain came alongside Apple's stellar earnings release one week ago, but Apple has continued to drift upward since that time and closed at yet another record high of $456.48 today after touching $458.24 early in the day's trading. 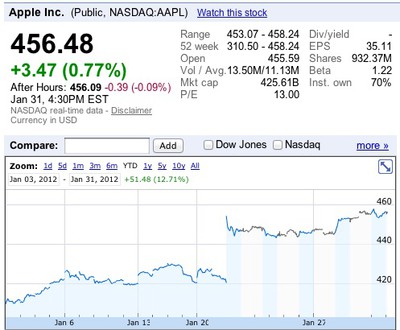 Apple's market capitalization now tops $425 billion, and a weakening of Exxon Mobil's stock price over the past week has enabled Apple to open up a nearly $25 billion lead in the race for world's most valuable publicly-traded company.

ok, i'l wait for the soar but when Apple starts paying dividends i'm out. Steve Jobs hoarded this mountain of money for something, i'm afraid that Tim Cook just isn't that ambitious to make good use of it.

What would Apple do with 100 B dollars? Apple did learn a lot about large and impressive buildings lately. :cool:

Steve never wanted to be in the position he was again back with Apple the first time around...that is why he was so cautious with money.

But remember, Apple's view is that it doesn't buy/acquire things it doesn't need, where many companies buy something, like a competitor and then just let it flounder and die where Apple just destroys the competitor with their own product and lets the competitor die on it's own.

What can Apple do with 100B Dollars...pretty much anything it damn well wants to is the correct answer =)

There are lots of articles on what it could buy with that much money...it's pretty staggering. Just do a search for them.
Score: 5 Votes (Like | Disagree)

I saw this stock around $360-$370 just a few months ago, but I don't really have the money to make it worth my while.


I understand how people can be turned off by high priced stocks ... but it's all about % return. Higher priced stocks and low priced stocks tend to fluctuate the same % amount.
Score: 5 Votes (Like | Disagree)

MacRumors... You got your terminology confused.


You actually are confused... :rolleyes:
Score: 3 Votes (Like | Disagree)

MacRumors... You got your terminology confused.


In theory, the word "point" is used in reference to dollars, not percentages, but few, if any, people uses "points" to describe stocks on a daily basis. Its cents, bucks, and percents.
Score: 2 Votes (Like | Disagree)
Read All Comments