T-Mobile will support users who have questions about "common procedures, information about feature and specifications and other basic device questions." Most T-Mobile iPhone users are limited to T-Mobile's slower EDGE network due to the iPhone's incompatibility with the 1700/2100 MHz bands used by the carrier for its faster data networks. Late last year, though, some of T-Mobile's towers were adjusted for its faster HSPA+ network, moving them to the iPhone-accessible 1900MHz band in some "pockets" of the country.

Earlier this month, T-Mobile claimed the next iPhone chipset could be capable of supporting the carrier's Advanced Wireless Spectrum, but noted that it didn't have any specific knowledge of Apple's future products.

The capability is in the qualcomm radio. Apple just needs to invest in the transceiver, PCB changes and modifications to the external antenna to support the AWS bands. Given these are small hurdles, the hurdle is a political/economics one, not a technical one.

Even handsets that support LTE over AWS like the AT&T HTC Vivid have the HSPA+ radio disabled on the AWS portion, again effectively locking out T-Mobile. This shows it's purely politics and probably stipulated by AT&T to have the phone on their network.

I suspect you will see Apple do something similar to "save battery" or something.
Score: 4 Votes (Like | Disagree)

chrmjenkins
The capability is in the qualcomm radio. Apple just needs to invest in the transceiver, PCB changes and modifications to the external antenna to support the AWS bands. Given these are small hurdles, the hurdle is a political/economics one, not a technical one.

The specs aren't going to advertise it because apple has no intention of running on those frequencies. 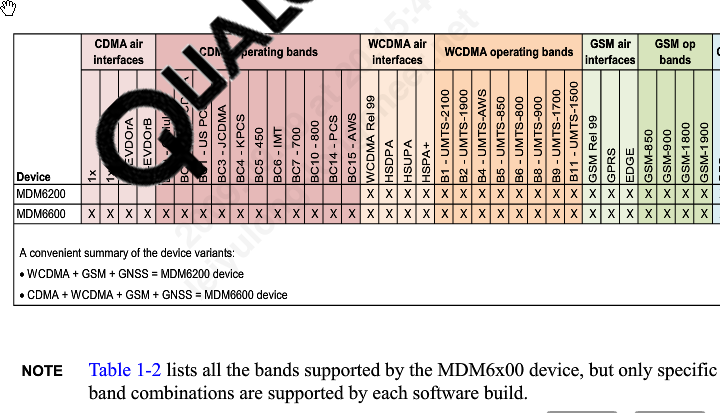 As much as people love to hate on AT&T, I've actually had better customer service with them than Verizon. When people say AT&T has bad service, I never actually hear any details about an encounter they had. It's just taken for fact.

Ok, I will give actual examples:

First off, please note that with AT&T, this is a business account, so there are a ton of lines on it and we spend a fair amount with them every month.

There was fraud committed on the account, which took several months to get the charges reversed, even though they acknowledged the fraud. Then when we went to order new phones, we were "not eligible for an upgrade" as they never fixed our upgrade eligibility status when they removed the line. I had to go to the vice president of AT&T to get this resolved.

They also had double billed us for certain lines and kept saying it was our fault.

Anytime that I need to call them, it takes 15-20 minutes to get a live person and this is through their key contact center, which is supposed to be a lot faster than the consumer side.


Now, let's compare this to T-Mobile, which I personally have as a family line with 5 lines:
We accidentally purchased something, it was our fault, but we called T-Mobile, they immediately reversed the charges.

When they started enabling data by default for smart phones and charging for it, we called them after we were charged about $100, they reversed the charges (and extra) and put a block on it within about 2 minutes.

My wife wanted to be able to tether her Android phone, she called them, they gave her instructions on how to do so without having to pay the extra $5 per month that they officially want you to pay.

We have never waited for more than 2 minutes on hold for a representative and that was when 1/2 the state was experiencing a service outage.
Score: 3 Votes (Like | Disagree)

chrmjenkins
As much as people love to hate on AT&T, I've actually had better customer service with them than Verizon. When people say AT&T has bad service, I never actually hear any details about an encounter they had. It's just taken for fact.
Score: 3 Votes (Like | Disagree)

rcappo
Will I be allowed to tether my phone to my laptop? Will the data plan be reasonably priced?
Score: 1 Votes (Like | Disagree)

WatchTheThrone
Good for tmobile supporting even phones they don't sell. I had an unlocked 3GS with tmobile and never did I have a problem with it but when Sprint got the iPhone and tmobile didn't I decided to give sprint a try.
Been very happy with Sprint even though their 3G was slow at launch but now I'm getting on average 1.2mb/s and for me thats pretty good o and having truly unlimited is a major plus!! (did 4.5 gigs last month and no throttling) :)
Score: 1 Votes (Like | Disagree)
Read All Comments