Contrary to some reports, Apple CEO Tim Cook said today that the company hadn't seen any slowdown in iPad sales following the introduction of the much-hyped Kindle Fire tablet. 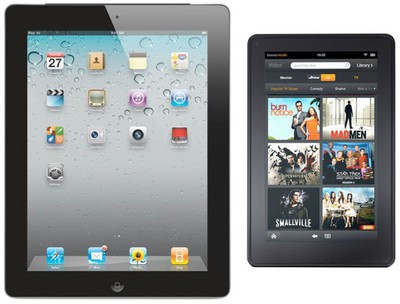 When asked by an analyst during today's quarterly earnings call about the impact on the iPad from lower priced tablets, Cook noted that the company sold a record 15.4 million iPads and that Apple doesn't consider "limited function tablets and e-readers to be in the same category as the iPad". A big reason for the iPads success, Cook believes, is that the ecosystem for the iPad is "in a class by itself".

We strongly believe in optimizing applications from day one to take advantage of the larger canvas. There are only a few hundred apps designed for the competition, versus more than 170,000 apps designed specifically for iPad. People who want an iPad won't settle for a limited function tablet.

Apple execs have said before, and Cook reiterated today, that they believe tablets will pass the PC market in units, and that in the United States according to IDC, tablets outsold desktop PC's last quarter on a unit basis.

Throwing down the gauntlet to other tablet makers -- who thus far haven't been able to mount a significant challenge to the iPad -- Cook finished by saying Apple was going to "continue to innovate like crazy" and that the company will continue to compete with any company currently shipping tablets, or anyone who may enter the market in the future.

The next generation iPad 3 with a high-resolution Retina Display is expected to be introduced in the next few months.


Yet, Apple sells their iDevices and other accessories at Walmart.

Not all Walmart-Loving Consumers, as you put it, go for low quality.
I am price-conscious, and sometimes shop at Walmart, but I would choose an iPad over any other tablet without second thoughts at this time.
Score: 31 Votes (Like | Disagree)

imahawki
This is largely because they aren't really competing, which is what a lot of people here said before the Fire even dropped. Its kind of like saying "BMW saw no change in 7 series sales when the Fiat 500 went on sale". Uh yeah, big shock.
Score: 27 Votes (Like | Disagree)

That's funny because I bought my iPad 2 at Walmart. :)

Then you're clearly a low-quality person.
Score: 17 Votes (Like | Disagree)

Monday May 17, 2021 6:06 am PDT by Joe Rossignol
Apple today announced that Apple Music will be gaining support for Spatial Audio with Dolby Atmos at no additional cost starting in June. At launch, Apple Music subscribers will have access to thousands of songs in Spatial Audio from artists like J Balvin, Gustavo Dudamel, Ariana Grande, Maroon 5, Kacey Musgraves, The Weeknd, and many others. Apple says this feature will provide a...
Read Full Article • 448 comments