Back in 2010, an Apple patent publication was published revealing the company's concept for an iMac supporting both mouse-driven and touch-based input with a hinged display arm allowing the screen to transition from an upright position to a horizontal surface. 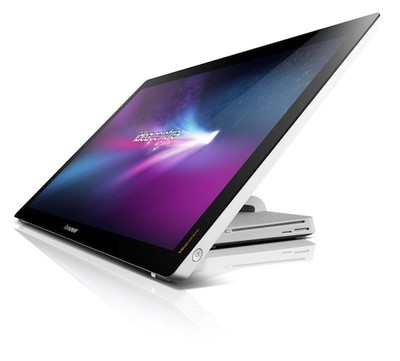 While Apple has yet to release such a product and may have scrapped the idea entirely, Lenovo's new IdeaCentre A720 being shown off at CES this week (via Engadget) offers a similar flexibility in its ability to transition between a traditional all-in-one desktop configuration and a flat, table-top touch surface.

Similar to the HP TouchSmart 610, which debuted around this time last year, it has a display that can be tilted between 5 and 90 degrees, the idea being that that 10-point multitouch panel will be easier to use if it's lying at a near-flat angle. Spec-wise, it'll be offered with various Intel Core i processors, discrete NVIDIA graphics and up to either a 1TB HDD or a 64GB solid-state drive. Expect it to hit sometime in the first half of this year, starting at $1,299.

The Verge also posts a hands-on video showing the IdeaCentre A720 in use in both upright and horizontal positions.


The hands-on demonstration shows a rather sluggish response to touch input, but offers a good glimpse of the flexibility afforded by the multiple orientations.

Apple's patent application included descriptions of sensors that would automatically detect the orientation of the display and adjust the operating system being used accordingly, with the idea being that the computer would utilize a Mac OS X interface in its upright orientation and then transition to an iOS-like touch overlay interface when moved to the horizontal display. While Lenovo's concept does not utilize this automatic sensing, it does offer Lenovo's dedicated IdeaTouch layer on top of Windows 7, which itself allows for touch input.

a.gomez
very nice... They getting ready for windows 8
Score: 7 Votes (Like | Disagree)

STILL can't get touch/scrolling to be responsive as an iPhone 2G.

edit: OHH... are those really led lights for CPU, HDD etc activity on the monitor?? crying...


Calm down, it could be the OS. Pretty sure it's the OS, let's wait until Windows 8 comes out until we judge. Since Windows 8 should have hardware acceleration.
Score: 6 Votes (Like | Disagree)

bushido
OMG it has a black bezel how dare they
Score: 6 Votes (Like | Disagree)

Most desktop displays are much lower resolution.

I do believe Apple does have a patent on the tilting screen for their all in one pc's.

No, they don't.
They have a patent for how the sensors in the hinges and behind the display work in conjunction with the OS to change input methods based on the position of the display.
The patent is very specific and there are other ways to achieve the same results without infringing this patent.
Score: 5 Votes (Like | Disagree)
Read All Comments