Apple Discloses Methods for Transitioning Between Mouse-Based and Touch Interfaces 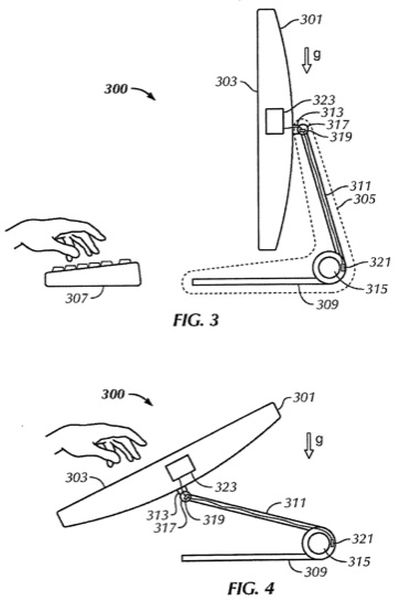 Patently Apple reports on an Apple patent application published earlier this year that discloses how Apple might choose to implement systems for transitioning a single Mac computer between mouse-driven input for Mac OS X and touch-based input for iOS.

The method utilizes sensors such as a rotation hinge located in a stand for an iMac-like computer or accelerometer-based orientation sensors that could allow the device to function as a traditional desktop computer when the screen is positioned vertically or as a large tablet-style device when positioned horizontally.

As another option, Apple proposes touch sensors located in the frame of the device's display that, when grabbed in the manner of a tablet and combined with a change in orientation detected by accelerometer-based sensors, could initiate a transition between input modes. In any of the described methods, the mode transition could involve a user interface transition between high-resolution mouse-driven actions and low-resolution touch-driven actions.

Not limited to desktop computers, Apple's patent application also depicts a notebook-style computer that could transition to a tablet device, with the operating mode adjusting automatically depending on orientation.

Apple has been expressing interest in touch-enabled Macs recently, with a multiple rumors on such an iMac making an appearance sometime this year. And while converting Mac OS X to a touch-specific interface would be a significant undertaking, one former Apple engineer suggested that adding an iOS layer on top of Mac OS X would be a reasonable undertaking.