A few more interesting items are starting to leak out ahead of CES 2012. 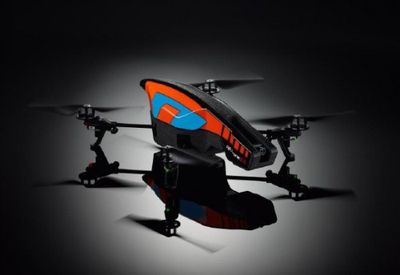 Engadget publishes a press release for Parrot's new AR Drone 2.0 which sports a 720P HD Camera. The original AR Drone was shown off at CES 2010. It's an iPhone-controlled quadricoptor that uses a number of sensors, including a downward facing camera, to help stabilize its flight. You control the flying machine with the use of your iPhone.

The 2.0 upgrade now offers a 1280x720 resolution camera that can be used to record videos as well as new flight control modes to allow for easier handling. Per Gizmodo:

Perhaps best of all, it's now even easier to pilot. Before you had to rely on the camera to know which way the AR.Drone was facing, and then send commands from the drone's perspective. That option is still available for advanced users, but the AR.Drone 2 now senses where you are, so tilting your phone/tablet away from you will send the drone away, and tilting it to your right will make the drone go that way, too. It's incredibly intuitive.

The 2.0 version of the AR Drone will be $299 and available in the 2nd Quarter of 2012. This video shows the original AR Drone in action:

According to OCZ, the Thunderbolt-equipped SSD should have transfer rates as high as 750MB/s and "improved latency and highly accurate time synchronization" for professional audio/video work. No timeframe on release, but more details may arrive at next week.

ri0ku
oh man if the thunderbolt ssd's are bootable I'm gonna be soooo happy. I bought an iMac but couldn't afford the internal ssd. So a few months down the line when money is saved an external drive would be great if its bootable since it will read faster than the 7200rpm hdd.
Score: 7 Votes (Like | Disagree)

iVoid
Unless it has another thunderbolt port on the other side (hard to tell from the pics), then massive FAIL.

Really need to have the dual ports to allow for daisy chaining and/or a MDP display at the end.
Score: 6 Votes (Like | Disagree)

Richdmoore
Having one thunderbolt port on my iMac, I will automatically pass on anything that cannot be daisy chained, as I need the terminating device to be a display port to HDMI adapter.
Score: 5 Votes (Like | Disagree)

Yeah, use that drone to spy on your neighbor.

Your neighbour would need to be deaf and blind for that it be effective.
Score: 4 Votes (Like | Disagree)

Get ready to sell off one of your kids as an indentured servant for 7 years. :eek:

Seriously. External TB drives will cost much more than internal SSD's do now. (which most find out of their price reach).
Score: 4 Votes (Like | Disagree)

Sorry, it just sounded like you were trying to rally consumers into a movement akin to the "We are the 99%", but targeting instead the existence of elitist technologies that are priced higher than the masses can afford.

No, I'm not making such a statement since I'm probably closer to the 1% than the 99% anyhow. I'm saying all these products offer little value to consumers for the price they are at.

Thunderbolt is that last 10%.

I think you're being a little narrow with your definition of "consumer." I can pick up an Apple TB display from at least 3 different stores at my local mall. And if I peruse the TV section of Best Buy I can find dozens of IPS displays that retail for more than $1k.

*sigh*. And I have a Cisco Pix 501 here in my house which I used for years as my Internet firewall. That doesn't make it a consumer product.

IPS TVs are not IPS computer monitors. There's a reason consumers want IPS in a TV, viewing angles. I don't always sit straight in front of a TV, especially if I'm having a bunch of people over to watch the game or something.

Thunderbolt looks more and more like its being aimed at the prosumer/professional market. Not the consumer. The products reflect that (SSD external enclosures, RAID arrays, 300$ port extenders, IPS monitors with some ports on it).
Score: 3 Votes (Like | Disagree)
Read All Comments