The Bluetooth Low Energy specification promises a low-power and low-latency implementation that opens the door to a number of new kinds of Bluetooth-powered devices. The expectation is that low power Bluetooth transmitters/receivers will be able to send data to and from your iPhone without complicated setup. Possible examples included a special watch that could receive notifications, proximity detectors, health monitors and more. 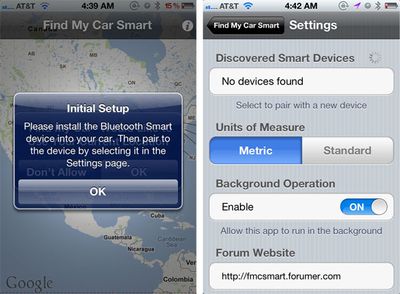 A company called FMC Smart has just launched a Kickstarter for the first Bluetooth Low Energy App and companion module for the iPhone 4S.

Right now, there are apps on the iPhone that will save the location of my car, but I have to manually launch the app to drop a pin each and every time I have parked my car. Stopping to launch an app when I'm running into work or trying to catch a plane is a complete waste of time and totally annoying. So I developed an app that allows the iPhone 4S to remember the last place I parked and the only time I have to launch the app is after I've lost my car, not before.

The company posts a nice FAQ which details some of the common questions and how the product works.

You need to install a small USB-powered Bluetooth proximity adapter in your car, which pairs with your iPhone. This proximity adapter talks to your iPhone's Find My Car Smart App running in the background. When you leave your car, it remembers this last GPS location automatically. No manual intervention is required. They claim there is only a small decrease in battery life of your iPhone due to the background operations, especially if you are only parking your car a few times a day. More extensive drivers may see more of a battery drain.

Note that as a Kickstarter project, the Bluetooth dongles won't ship until they reach their funding goal, so we haven't been able to test the product nor are we endorsing it. The App Store companion app, however, has been approved by Apple and is already available in the App Store [$0.99]. We have downloaded that app which is shown above in screenshots.

We should expect to see more Low Energy Bluetooth accessories and applications in the future. For now, the iPhone 4S is the only iOS device that supports the new standard.

samcraig
App/appliance won't really help in a multi level garage situation though, will it?
Score: 6 Votes (Like | Disagree)

I take a picture of my car and its surroundings - with geotagging on. So, with a quick snap, I have an image and a waypoint.
Score: 5 Votes (Like | Disagree)

Dades
I'd prefer if Apple concentrated on the mammoth task of making it easier to turn Bluetooth on and off without a unnecessarily long process of taps and swipes.

Particularly given that this is often done driving a car when people realise that BT is switched off.
Score: 4 Votes (Like | Disagree)

umm... my car already has bluetooth... why couldnt i use this now?

What Bluetooth Smart Tags are supported?
At the moment we’ve only tested with a BlueGiga BLED112, however any Bluetooth Smart or Bluetooth Low Energy tag should be compatible. Please note that the tag needs to be programmed with a broadcast profile in order to be used. See the Supported Devices Forum for more information.
http://www.bluegiga.com/BLED112_Bluetooth_low_energy_dongle

A useful App I am sure.

But I wonder what the owners of the worlds 800 million cars did to 'find' their vehicles, before this App came along....?

Same goes for electricity and water.

Why should we do anything to move past cavemen! I am with you! What did people do before forums and message boards?
Score: 2 Votes (Like | Disagree)

RWinOR
In all my years of driving I have never misplaced my car either.

Now where this would be very helpful is in a shared car family. I park at night, my wife takes my car shopping while I am home. She parks somewhere, I need car in the morning and have to hunt for it, as she parked it last and I was not with her.

When it can actually track my car even if I am not in it when it is parked, I will be much more interested.
Score: 2 Votes (Like | Disagree)
Read All Comments

Wednesday January 26, 2022 8:56 am PST by Joe Rossignol
Benchmark results have started to surface for MSI's new GE76 Raider, one of the first laptops to be powered by Intel's new 12th-generation Core i9 processor. Intel previously said that its new high-end Core i9 processor is faster than Apple's M1 Max chip in the 16-inch MacBook Pro and, as noted by Macworld, early Geekbench 5 results do appear to confirm this claim, but there are several...
Read Full Article • 236 comments