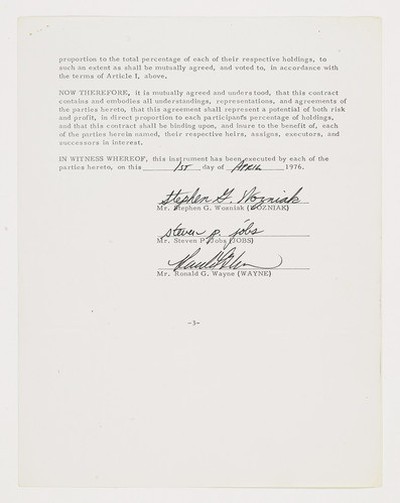 Bloomberg reports that Sotheby's is preparing to auction off the original three-page document that served as the contract among Steve Jobs, Steve Wozniak, and Ron Wayne to establish Apple Computer on April 1st, 1976. The auction, set for December 13th, is predicted to see the document fetch $100,000 to $150,000.

“This is a foundation document in terms of financial history, social history and technological history,” said Richard Austin, the head of books and manuscripts at Sotheby’s in New York.

Additional papers documenting Ron Wayne's withdrawal as a partner just 12 days after the company was formed are also included in the auction package. Wayne initially received $800 for his 10% share of the company, and later received an additional $1,500 payment.

According to Sotheby's, Wayne sold the documents to a manuscript dealer at some point before another party acquired them in the mid-1990s as Apple appeared close to bankruptcy before Jobs returned to the company. That party has now decided to sell the documents given the recent publicity about Jobs following his death and the release of his authorized biography.

yomibro
Apple should purchase the documents, frame them and make it as a permanent display in their new spaceship HQ.
Score: 27 Votes (Like | Disagree)

Pawn Stars will buy it for $50


only after they've brought in a buddy expert to take a look at them first of course.
Score: 16 Votes (Like | Disagree)

ThunderSkunk
Saw a recent interview with Wayne. He was nothing but realistic about his having given away his share of Apple. It made sense at the time, so he did it, felt no regrets, and is quite genuinely happy to see the boys become as successful as they did. Good-natured guy, a rarity among bazillionares.
Score: 6 Votes (Like | Disagree)