Several MacRumors readers have reported that Apple has rolled out new Apple TV support for streaming purchased television shows in Australia, Canada, and the United Kingdom. Users in those countries have been able to rent movies directly on the Apple TV, but purchased content was required to be downloaded to a computer and then streamed to the Apple TV via Home Sharing. With the new update, purchased TV shows are simply stored in iCloud and streamed directly to the Apple TV on demand. 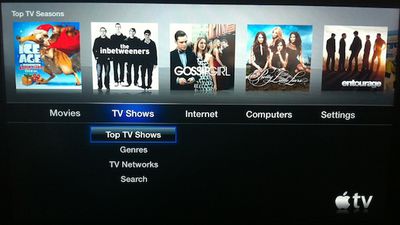 TV shows on Apple TV in Australia (Source: Mac Prices Australia)
Apple TV streaming of purchased TV shows came to the United States back in August. That addition was accompanied by a new TV Shows section of the purchased items listings in iTunes, allowing users easy access to download purchased shows to any device.

Besides TV show purchases, Apple had previously offered 99-cent rentals of TV episodes. Apple discontinued that offering in August, noting that customers preferred to purchase their shows and that the new iCloud flexibility offered additional benefit to purchases.

Update: It appears that the new menu option may have been released prematurely, as a number of users are reporting that the TV show option is either not functioning or has disappeared completely.

ipedro
Finally! The release of ATV2 saw the removal of the TV menu in Canada after we'd been waiting years to get it the first time. The justification was that Canada didn't get the rights to TV rentals and since the ATV2 doesn't have local storage, there was no use for the TV menu. With the death of TV rentals, it was a matter of time before the menu returned.

Nonetheless, prices are very much out of tune with the rest of the industry. You can rent unlimited tv shows on Netflix for $7.99 a month and many channels now offer their shows for free via their websites and many of them available on their apps able to be streamed to the AppleTV with AirPlay.

This has come too late for iTunes. I'd pay for a subscription to tv shows, but not $3 per episode.
Score: 3 Votes (Like | Disagree)

GenesisST
Finally! No more "Is it downloaded yet?" from the wife!
Score: 3 Votes (Like | Disagree)

MotoMaster
Nothing on my Apple TV for TV shows here in Ontario, Canada.

Nothing new appeared for me in the UK. No updates available, and no change after a reset.


I'm glad it's not just me. All that excitement and nowt. BAH.
Score: 2 Votes (Like | Disagree)

I love avoiding the hassle of going to the video store but the price differential is too steep. Here I can rent for 1$ a disk which usually includes 4 episodes, while on apple TV it costs 3,49 per episode, that makes it 14 times more expensive :mad:

Also, keep in mind that you're paying $1 to rent those four episodes; the ones you purchase from iTunes are yours to keep rewatching forever. Whether that's actually of any value to you is of course your own opinion.
Score: 2 Votes (Like | Disagree)

tootall
I love avoiding the hassle of going to the video store but the price differential is too steep. Here I can rent for 1$ a disk which usually includes 4 episodes, while on apple TV it costs 3,49 per episode, that makes it 14 times more expensive :mad:
Score: 2 Votes (Like | Disagree)
Read All Comments