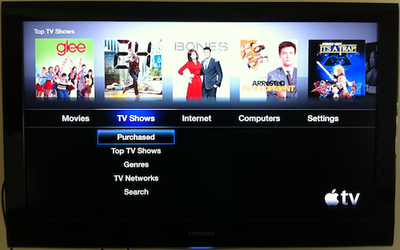 You can buy — not just rent but buy — new episodes directly from your Apple TV, and access and stream any TV show episodes you’ve previously purchased using your iTunes account. (I’m not quite sure if it has all episodes — but it’s showing me all the TV shows I can remember buying from iTunes.)

According to one report, however, the feature may be U.S.-only for the time being.

Update: Apple has also added TV shows to the "Purchased" sections of iTunes on both iOS and Mac/PC applications. The addition allows users to freely re-download previously-purchased TV show content in the same way that Apple enabled the feature for music alongside its iCloud announcements in early June.

Update 2: Apple has now updated its Apple TV support document with information on the two main changes included in the 4.3 update.

Spoony
So this is like iCloud for TV and Movies?

I'm sick of storing all my purchased content on my computer. It's hogging up all my space (I know i should just get an external harddrive). If this is the true this is awesome. Allowing the apple ecosystem to manage my content. I'm digging this.
Score: 6 Votes (Like | Disagree)

Being an early adopter who dropped 300 bucks on a 1st-gen Apple TV, it feels like a slight betrayal to see these updates (Netflix, Vimeo, etc.) available only to the users who paid $100 for a 2nd-gen ATV... I always told people that one of the (many) reasons iPods prevailed over other MP3 players was that Apple kep supporting/updating them long after you purchased it, but now I'm feeling the opposite with my Apple TV :confused:


This isn't an iPod, where the software was hardly ever updated and when it was the OS on an old iPod classic was pretty bare bones.

Hairball
NHL / NFL support would be a great addition. While they are at it, add a NASCAR channel as well.

:apple:TV needs to add more support for video sites. A Showtime or HBO channel would be a major game changer and huge surprise. It'll probably never happen though:(

The cable cord needs to be cut!
Score: 5 Votes (Like | Disagree)

TwinCities Dan
I all want is to be able to sort my movies by date added. It seems so simple, I have over 800 movies and I want to see the recent additions. :o
Score: 5 Votes (Like | Disagree)
Read All Comments