Tuesday December 6, 2011 6:46 am PST by Eric Slivka
As predicted by Amazon following its release, Walter Isaacson's authorized biography of Steve Jobs has become the retailer's best-selling book of 2011. The milestone is a remarkable one given that the book did not debut until late October. 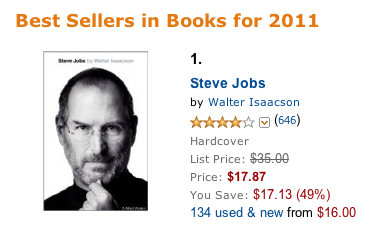 Steve Jobs quickly rose to #13 on the list following its debut, which was moved up in the wake of Jobs' death in early October. By mid-November the title had risen to #2 on the list, setting the stage for its accession to the top spot.

Sony Pictures has acquired the movie rights to the authorized biography, and Aaron Sorkin is "strongly considering" taking on the task of writing the screenplay for the film. One report has indicated that George Clooney and Noah Wyle are in the running to portray Jobs.

acidfast7
I found that Biography quite good. A quick read actually as the text is quite large.

However, a movie would be totally crappy.

Also, George Clooney has really gone down the crapper since Syriana :(
Rating: 7 Votes

Most torrented ebook as well...


Yep.
That is what happens when you price fix the price to $15 for an e-book.
Rating: 6 Votes

alex00100
that was quite predictable, wasnt it?
Rating: 5 Votes

I wonder how many would have sold if he didn't die.

You mean "Heaven is for Suckers: A Father's Fraudulent Story of His Son's Imaginary Trip to Oz and Back?"
Rating: 4 Votes

ghostface147
I guess I am in the minority that thought the book wasn't really all that. It was just average.
Rating: 4 Votes

TWSS37
I'm actually shocked there's 134 copies available "used". I know when I was done reading this I put this in my china cabinet right in between my Faberge egg collection and original print of the Declaration of Independence.
Rating: 3 Votes

I guess I am in the minority that thought the book wasn't really all that. It was just average.

For me it was definitely a below average book about an above average individual.
Rating: 3 Votes