The New York Post reports on some of the details of Apple's contract with the Metropolitan Transportation Authority (MTA) for its Grand Central Terminal retail store, noting that Apple received an extremely favorable deal for the space compared to other tenants at the terminal. Among the most significant concessions made by the MTA was a lack of any revenue sharing from what has been estimated to be a potential $100 million per year sales location.

But while real estate insiders estimate the shop will rake in $100 million a year in sales, Apple won’t be sharing a nickel with Grand Central’s operator, the Metropolitan Transportation Authority.

The tech giant is the only retailer in the fast-growing retail transit hub to have such a sweet lease.

Critics likewise note that Apple’s $60-a-square-foot lease is well below what many other tenants are paying — including a future Shake Shack burger joint that will be shelling out more than $200 a square foot, according to the leases, copies of which have been obtained by The Post.

All other tenants at the terminal with the exception of a Chase ATM branch pay a percentage of their sales to the MTA once an agreed-upon threshold has been reached. The MTA has apparently been willing to sacrifice such an arrangement in order to land Apple as a tenant, projecting that the company's presence will drive increased sales at many of the over 100 other retail stores at the terminal. 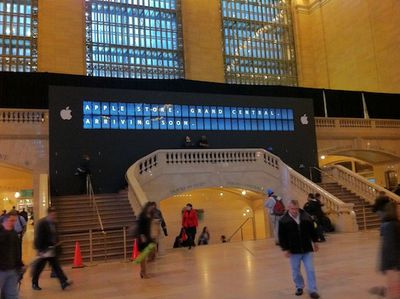 Apple's Grand Central Terminal retail store (Thanks, Tom!)
Apple has posted digital signage advertising the forthcoming store, with The New York Post having indicated that it will be opening on December 9th.
[ 136 comments ]

burjeffton
Yikes... this feels slimy. If it was a company like Walmart people would be rioting.
Score: 19 Votes (Like | Disagree)

The biggest determiner in the price/sq ft difference between the Apple Store and the Shake Shack is the amount of space occupied. Apple's is 23,000; SS is 2,270.

You wouldn't know that by reading the article, but we are talking about the Post here. I guess it's remarkable that the words "mangled" "toilet" or "hooker" weren't somehow worked in.
Score: 15 Votes (Like | Disagree)

maflynn
I question the legality of a public institution giving sweet heart deals like this. Doesn't seem in the best interest of the tax payers
Score: 12 Votes (Like | Disagree)

The size has no relevance, it's not like a company with $80B in the bank can't afford $200/sq. ft. anyway. The commercial value of the real estate doesn't change due to the size of the place, not where I'm from anyway.

It's a classic case of the rich getting richer, and much like Apple's $7B quarters where half the people on this site practically cream themselves and then decry Apple when they cut enormous bonuses to their executives, people will do the same here--say how great and awesome and powerful Apple is, and then complain when they give the money to the top executives at the company.


A sweetheart deal for Apple where NY is practically giving away the space. Meanwhile, NY will continue to blame its budget shortfalls on pension outlays, unions and other hardworking New Yorkers for "not doing their fair share". Even though NY is already the highest taxed state in the union :mad:
Score: 11 Votes (Like | Disagree)

mutantteenager
Isn't it great when public utilities bend over for big business. I feel like emptying my wallet into the hands of the next rich person I see....
Score: 8 Votes (Like | Disagree)
Read All Comments