At Apple's "Let's Talk iPhone" event in October, Epic Games showed off some visuals from Infinity Blade II, the sequel to the company's ground-breaking and profitable title launched nearly a year ago. Infinity Blade, utilizing Epic's Unreal Engine 3, has been highly-regarded for its rich visual textures and gesture-based input in fighting scenes. 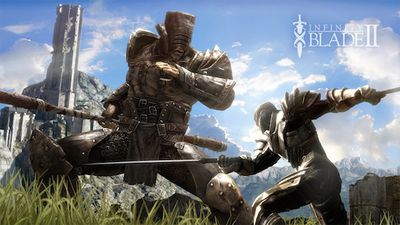 As an encore performance, Infinity Blade II is making its way into the App Store today, with our sister site TouchArcade calling it "an iOS masterpiece".

Infinity Blade 2 is a step a step or two beyond what was accomplished in the original, adding in layers and layers of next-level environmental and character texture detail on top of a ton of fantastic ambient touches -- sharper shadows, stronger lighting, and a glut of atmospheric effects bolster what's already a visual delight, especially on iPad 2 and iPhone 4S.

It's a consistently well put together visual feast that shows off what Unreal 3, and now your new devices, can do.

Beyond the enhanced visuals, Infinity Blade 2 also advances the storyline of the original game and expands the combat experience to include more options and less predictable enemies.


Infinity Blade II has already appeared in Apple's Asia-Pacific App Stores such as in New Zealand [App Store], and should be hitting the U.S. store priced at $6.99 at 11:00 PM Eastern Time tonight.

[u
Infinity Blade II has already appeared in Apple's Asian App Stores such as in New Zealand [App Store (http://itunes.apple.com/nz/app/infinity-blade-ii/id447689011?mt=8)], and should be hitting the U.S. store priced at $6.99 at 11:00 PM Eastern Time tonight.

a glorified tap, tap game... Love how iOS kids keep talking about "X" just kills your batteries and turn around and waste battery life on an idiotic videogame that all you do is time taps and swipes :rolleyes:

keep saying it, iOS is the dumbing down of apple :mad:


It is also the Rise of Apple.

ericrwalker
Australia and NZ are just under Asia. I could swim there from the Indonesia.

"Apple's Asian App Stores such as in New Zealand" lol

BanterClaus
The graphics look amazing. Cant help feeling this is basically a tech demo though and the gameplay is still rather limited.
Score: 7 Votes (Like | Disagree)

a glorified tap, tap game... Love how iOS kids keep talking about "X" just kills your batteries and turn around and waste battery life on an idiotic videogame that all you do is time taps and swipes :rolleyes:

keep saying it, iOS is the dumbing down of apple :mad:


What are you expecting, or anyone for that matter, from a game played exclusively on a 3.5 inch screen with no physical buttons to play with?

All ios games are tap tap games, you tap, swipe, pull, push. What game doesn't use these features on the ios platform.

Must be the dumbing down of PC Gaming, how dare they!

Listen, I get that somewhere along the line you became jaded, or pissed off at Apple for something they did, its apparent you have some aggression aimed at iOS specifically. Its not just iOS, all touch screen style games are swiping and tapping. Yes, its a timed game, but it still takes skill, try some of the hardest levels of the first Infinity Blade and try to tell me its simple, its not.