Research firm Gartner today released its results of worldwide mobile phone sales for the third quarter of 2011, once again revealing how delayed purchases ahead of the iPhone 4S resulted in a dip in unit sales and market share for Apple. According to the report, Apple's share of the total mobile phone market came in at 3.9% for the quarter, down from 4.6% in the previous quarter. The performance was strong enough, however, to maintain fourth place in the rankings behind Nokia, Samsung, and LG.

Apple shipped 17 million iPhones, an annual increase of 21 percent, but down nearly 3 million units from the second quarter of 2011 because of Apple's new device announcement in October. Gartner believes Apple will bounce back in the fourth quarter because of its strongest ever preorders for the iPhone 4S in the first weekend after its announcement. Markets such as Brazil, Mexico, Russia and China are becoming more important to Apple, representing 16 percent of overall sales and showing that the iPhone has a place in emerging markets, especially now that the 3GS and 4 have received price cuts.

Looking at the narrower smartphone market, which represented 26% of mobile phone sales during the quarter, iOS slipped from an 18.2% share in the second quarter to 15.0% in the third quarter, trailing market leader Android and Nokia's soon-to-be-defunct Symbian platforms. Notably, Android leapt to grab 52.5% of the smartphone market during the quarter, more than doubling year-over-year and up significantly from 43.4% just last quarter. 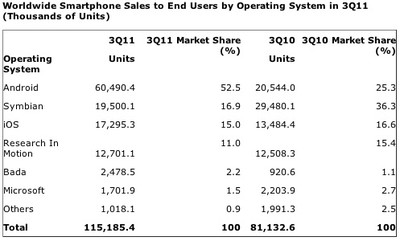 In another stark example of Apple's rise to dominance in profit share, Fortune yesterday published several charts from a new report from analysts at Oppenheimer & Co. The graphs show that while Apple's share of smartphone unit sales has somewhat stagnated over the past couple of years, its share of smartphone profits has soared to an estimated 65% during 2011. That trend is predicted to continue in 2012, with Apple pushing toward 70% profit share.

DMVillain
In 2007 Steve Jobs said he was after only 1% marketshare. Obviously, marketshare is not what they are chasing.
Score: 17 Votes (Like | Disagree)

The iPod and the iPad are not a phone. Only the iPhone is. Can you make calls with a iPod or iPad via a celluar network? Thought so.

Android is an excellent platform? We must have very different definitions of the word "Excellent".

Here we go again. Yes, some people prefer Android and some iOS en some others WP7. It's called personal prefference. Bassicly it is letting them pick the tool that they want to use to acomplish the same thing.

Both iOS,Android and WP7 are very good, and they both have their positive and negative sides. Who are you to judge someone just because they use a different platform...
Score: 15 Votes (Like | Disagree)


Why include them? This is only about phones and based on that, Android marketshare can't be touched.
Score: 13 Votes (Like | Disagree)

Yap, because the iPod touch is a very good smartphone, isn't?

Android is an excellent platform? We must have very different definitions of the word "Excellent".

Well, you also have a definition for smartphone or phone that includes iPod Touch and ipad, so yes, perhaps your definition of excellent may be also wrong
Score: 13 Votes (Like | Disagree)

You do realize that the internal components of an Apple computer is the same as you'd find in any other computer, right? The hard disc, RAM, graphic cards etc are all bulk standard ( In fact, graphic cards found in Apple PCs are often inferior to their Windows PC counter parts )

The internal components of Megan Fox are the same as those of any other woman.
Score: 12 Votes (Like | Disagree)

This saddest part of all this is I remember a time, not too long ago, when you were considered cool having iPhones, and MacBook Pros, etc......now everyone has one.....

you wanna be the only cool kid with the shiny toy so everybody likes you?

Thursday July 22, 2021 3:22 pm PDT by Juli Clover
iDOS 2, an app designed to allow users to play classic DOS games, will soon be pulled from the App Store, the app's creator said today. According to iDOS developer Chaoji Li, he tried to submit an iDOS update with bug fixes to the App Store, but was told that the update was rejected because it violated the 2.5.2 App Store guideline that says apps cannot install or launch executable code.Durin...
Read Full Article • 231 comments