Despite a sequential drop in iPhone sales in the third calendar quarter of 2011 as customers held out for the iPhone 4S, Apple once again seized over half of the profits generated by leading mobile phone manufacturers during the quarter, according to a new research report by Canaccord Genuity analyst T. Michael Walkley and shared by Forbes. According to the study's estimates, Apple raked in 52% of the overall profits during the quarter, down slightly from 57% in the second calendar quarter but up from 47% in the year-ago quarter that also had the then-new iPhone 4 on the market.

As noted in a report from AllThingsD on the same research note, Walkley predicts that the launch of the iPhone 4S will spur even further growth for Apple, pushing the company to take over 60% of industry profits in the final calendar quarter of 2011. 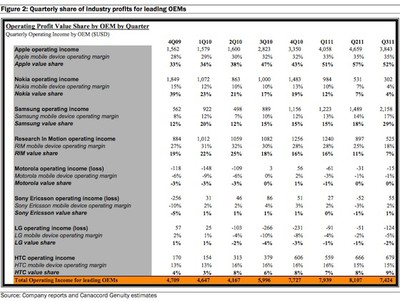 Walkley is not the only observer to routinely release estimates of mobile phone manufacturer profit shares, as asymco's Horace Dediu performs a similar analysis each quarter. Dediu's numbers have typically come in 5-10 percentage points higher for Apple than Walkley's estimates have, but the trends seen by each analyst are certainly consistent: Aside from some natural ebb and flow due to iPhone release cycles, Apple is continuing to increase its dominant share of mobile phone industry profits despite shipping only a small fraction of total units.

Kaibelf
Blah blah blah but Android's better it's on more handsets blah blah blah people who call it cheap just don't understand and are sheep blah blah blah Apple's dying and will be out of business in 3 days blah blah blah we're not fragmented garbage and the next phone has a bigger screen so it'll change everything the same way the last 67 Android phones that came out this week did..... :rolleyes::apple::D
Score: 22 Votes (Like | Disagree)

Microsoft makes more money off Android than Google does...

It's funny how Apple fanatics get excited about Apple raking in profits(ie their money).

Not really. Such strong profitability demonstrates a secure, viable future, along with continued reinvestment in future products and the ecosystem. Apple doing well is a good thing for Apple customers, so long as the customers don't feel like they're being bent over a barrel on price.

Blah blah blah but Android's better it's on more handsets blah blah blah people who call it cheap just don't understand and are sheep blah blah blah Apple's dying and will be out of business in 3 days blah blah blah we're not fragmented garbage and the next phone has a bigger screen so it'll change everything the same way the last 67 Android phones that came out this week did..... :rolleyes::apple::D


Consumers don't seem to mind paying (or paying more) for quality or when they perceive a better value proposition. All my Apple gear over the years has been worth every single cent.

There is very little buyers' remorse among Apple customers. Which is why they can command the level of brand loyalty they do. That takes a great deal of heard work, and it must be earned. Apple has earned my business, and they continue to earn it.
Score: 6 Votes (Like | Disagree)
Read All Comments

Friday July 30, 2021 9:04 am PDT by Sami Fathi
Tesla CEO Elon Musk reportedly once demanded that he be made Apple CEO in a brief discussion of a potential acquisition with Apple's current CEO, Tim Cook. The claim comes in a new book titled "Power Play: Tesla, Elon Musk and the Bet of the Century," as reviewed by The Los Angeles Times. According to the book, during a 2016 phone call between Musk and Cook that touched on the possibility of ...
Read Full Article • 228 comments