At its "Let's Talk iPhone" media event early last month, Apple announced that it would be launching its iTunes Match service in the United States at the "end of October". That launch date was itself apparently a slight delay from Apple's original plans given that support for the feature had been built into developer builds of iTunes 10.5, which was released in mid-October to support iOS 5 and iCloud. 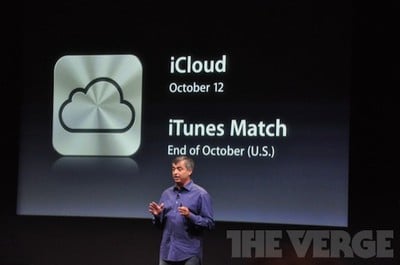 Eddy Cue announces "end of October" launch for iTunes Match (Source: This is my next / The Verge)
But with Apple apparently pushing back the iTunes Match launch slightly, the feature was removed from the public release of iTunes 10.5 and moved to a new iTunes 10.5.1 that was released for developer testing.

Sources have indicated that Apple is close to a launch of iTunes Match, with retail store staff having been briefed on the service in preparation for its debut. But with the calendar now having turned to November, Apple has missed its public launch target for iTunes Match. The company has not yet commented on the status of iTunes Match, leaving some questions about its plans even though a launch still seems near.

iTunes 10.5.1 beta expiration notice (Source: @dmoren)
One group that may have been caught off-guard by the delayed iTunes Match launch is Apple's developers, who have been testing the service for a number of months. Apple has repeatedly wiped users' iTunes Match libraries during the beta testing process, with the most recent wipe occurring last Thursday.

But those developers who have continued testing the service are now discovering that their iTunes 10.5.1 betas have expired, leaving them unable to launch the application as of today with no public launch and no new beta release. Apple routinely advises developers to only install beta builds of its software on machines dedicated to development, but some users undoubtedly have installed iTunes 10.5.1 on their primary machines and may now be experiencing difficulties.

My first thought too... just watch, bit by bit Steve's influence will disappear and we'll be stuck with Microsoft again :(


Do some digging and you will see this isn't the first time Apple has been late on an expected deployment. Many examples of this when Steve was at the helm too.

This is Business as usual for Apple, or really any other tech company. ;)
Score: 12 Votes (Like | Disagree)

Reminds me of a software scheduling rule:

If you slip your release schedule, people might complain.
If you ship a crappy product "on time," people will hate you.
Score: 11 Votes (Like | Disagree)

It's kind of sad that folks would be so negative about the Apple team for a few hours delay in a new service. No one knows why iTunes Match hadn't been released. I think Apple learned a very hard lesson from MobileMe about releasing crap software. I don't think they are going to let a flagship piece of software like iTunes Match go release with a bunch of problems, you would all complain 2x as much. You aren't giving the people who have run Apple for the last couple of years enough credit. :(


Because most of these commenters are kids.
Score: 9 Votes (Like | Disagree)

I am bummed..I cancelled my Spotify so I could use this service..Oh well have to wait now

Maybe all hands are on deck to fix the 4s battery issue first.


I expect there is 0 crossover between the people working on iTunes Match and any iOS battery bugs. What, you think there are like 10 guys working for Apple or something?!
Score: 8 Votes (Like | Disagree)

rorschach
I wonder if the Chicken Littles here already proclaiming the death of Apple remember when Leopard was delayed like 5 months - and that was a major OS upgrade.

Or Push Notifications on the iPhone, which were delayed almost a year.

Or the white iPhone.

All of that was with Steve at the helm.

Get a grip.
Score: 7 Votes (Like | Disagree)
Read All Comments

Tuesday May 11, 2021 5:06 am PDT by Hartley Charlton
Apple's next MacBook Air will feature a completely new design and come in a range of colors like the 24-inch iMac, according to leaker Jon Prosser, who has now released supposedly accurate renders of the new machines based on leaked images. In a new video uploaded to YouTube channel Front Page Tech, Prosser elaborated on his previous prediction that Apple's next-generation MacBook Air models ...
Read Full Article • 86 comments

Monday May 10, 2021 10:41 am PDT by Juli Clover
Apple's upcoming iPhone 13 models will be slightly thicker than the iPhone 12 models and will also feature larger, thicker camera bumps with lenses that protrude less, according to iPhone 13 schematics seen by MacRumors. The new iPhone 13 and 13 Pro models are expected to feature a thickness of 7.57mm, up from 7.4mm in the iPhone 12 models. That's an increase of 0.17mm, which won't be hugely ...
Read Full Article • 210 comments

Tuesday May 11, 2021 11:56 am PDT by Joe Rossignol
Last month, Apple introduced a new iPad Pro with the same M1 chip found in the latest Macs, and early benchmark results indicate that the M1 iPad Pro is over 50% faster than the previous-generation iPad Pro. Based on five legitimate Geekbench 5 results (here's the fifth) for the fifth-generation 12.9-inch iPad Pro with the M1 chip, the device has average single-core and multi-core scores of...
Read Full Article • 271 comments