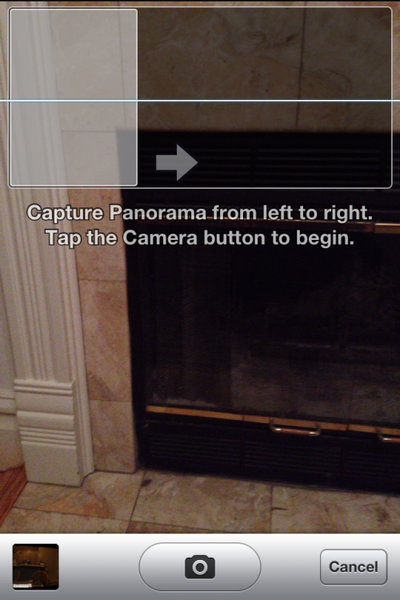 iOS developer @conradev revealed on Twitter that he had been able to enable a hidden "Panorama" mode in iOS 5. The setting can reportedly be enabled by setting 'EnableFirebreak' to YES in com.apple.mobileslideshow.plist. iOS developer @chpwn has already submitted an app to Cydia to enabled the panorama mode for Jailbroken iPhones.

Clearly Apple had been testing the Panorama mode as a possible feature for iOS 5, but for whatever reason it didn't make the cut into the final release. The user interface shows that a user can capture individual photos from left to right and the software will stitch it together.

japanime
I read the headline and the first two paragraphs of this story and my eyes and brain tricked me into thinking it said "Paranormal Mode!" It wasn't until it said "stitch them together" that I realized it was "Panorama Mode."

LOL at myself right now. :D

(Though how cool would that be — an iPhone camera that could capture paranormal activity!)
Score: 15 Votes (Like | Disagree)

Not liking the UI for it (the big plain button saying 'Panorama'. Looks a bit Android-ish :O

There is a reason it didn't make the final cut, expecting it to be polished is weird.
Score: 12 Votes (Like | Disagree)

Prodo123
I am testing this right now. It's very clear to me that there's an obvious reason why Apple didn't release it yet: it sucks.

When it does work, it's blurry as heck. 3rd pic is a good example.
Also worthy of note: The photos are in FULL RESOLUTION. Which means your iPhone 4 is technically capable of near-continuous shooting of 5MP pictures. And yes, this was taken with an iPhone 4.
Score: 11 Votes (Like | Disagree)

radge
download Photosynth. It's free, and will keep you at bay until the final release of this feature.
Score: 9 Votes (Like | Disagree)


Last year HDR didn't come to the iPhone until iOS 4.1, so its quite possible that this feature will be released along side iOS 5.1
Score: 7 Votes (Like | Disagree)
Read All Comments