Over 10% of U.S. Mobile Phone Users Now on an iPhone

comScore today released the results of its latest survey of mobile phone usage in the United States, noting that Apple has reached a milestone in surpassing a 10% share of the U.S. mobile phone market. As has been the recent trend, Apple again led the major phone manufacturers in growth between the three-month period ending in June and the period ending in September, growing by 1.3 percentage point to hit 10.2% of the U.S. market. 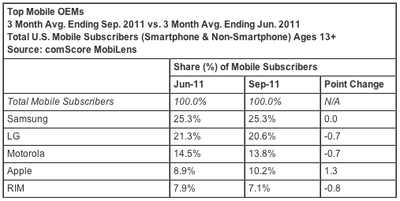 comScore's data tracks installed user base rather than new handset sales, making it more reflective of real-world usage but slower to respond to shifting market trends than some other studies. With today's released data covering the period of July through September, it is also important to note that it does not include any surge from the iPhone 4S launch, which took place in mid-October.


They saw 0.8% growth with one phone that was 16 months old. The should have lost market share to the 100s of Android phones on the market, but they were flat. I can't wait for the numbers in January...
Score: 7 Votes (Like | Disagree)

I hope it doesn't go too high. Whats the point of having a better product than someone else, if everyone has an iPhone.


So you think owning an iPhone makes one better than someone who doesn't?
Score: 6 Votes (Like | Disagree)

So what we've learned here is that it's innovation of LTD determines it to be so and he is free to change his definition at will. Got it.


No you got it wrong.

The defintions of innovation according to LTD is very simple. It is innovating if and only if Apple does it or Apple buys it up.
Everything else is either stealing or it sucks and therefor not innovating.

It is as simple as that. Apple label = good (and it could be dog crap but if it has an Apple logo on it then it is good)

I fail to see how this is impressive. I'd guess 90% of U.S Personal Computer users are now on Windows. That's fairly impressive.

If the iPhone hits 50%, I'll begin to be impressed.


Oh, that's a shame. At the last shareholders meeting, Apple's executive team said everything they've done so far was meant to impress roadbloc on Macrumors.
Score: 5 Votes (Like | Disagree)


Zombie Androids. Its really quite simple, if you work in an arena where paying attention to actual device use vs. sales is critical to your business its readily apparent that while Android may be shipping/selling a lot more devices, a significant, perhaps even majority, of Android users are using their phones as little more than phones.

I develop apps and mobile sites and generic Android simply isnt an appealing market for a small developer with the exception of the niche devices, or at least the Nook is proving to be quite a valuable market place and I expect the Amazon Fire will also be a great opportunity. The difference between these two devices and Android as offered by the mobile carriers is they have cultivated an ecosystem that is safe, far less cluttered with crap apps, content and a loyal customer base.

These devices are another type of Android Zombies, but its the devices that are Zombies rather than the users. The users are very active, but the devices are completely orphaned from the Android ecosystem.

Additionally Google and its partners has failed to create much stickiness with the Android ecosystem. Google because it derives 95% of its income from advertising must appeal to the broadest range of consumers as possible, they will continue to make apps for iOS and Blackberry and if Windows phones get enough traction for Windows phones, because they have to. This makes it easy for an Android user to leave Android and head to WPS7 or Blackberry or iOS. Contrary Apple, Amazon and Barnes & Noble are creating content that requires you to continue to use their products. Every year a user is part of the iOS ecosystem is additional expense moving to another platform.

I see one of two things happening with the market share race. It stays relatively the same with Android hitting 50-ish percent of the market mostly at the expense of BB, while Apple sticks right around 25%. Or as smartphones and tablets become more mainstream some of the Zombie Android users will start to realize the benefits of a smartphone and the superior nature of the iPhone will draw them to iOS.
Score: 5 Votes (Like | Disagree)


Or we could all marvel at the proliferation of the smartphone over the last 5 years.
Score: 5 Votes (Like | Disagree)
Read All Comments