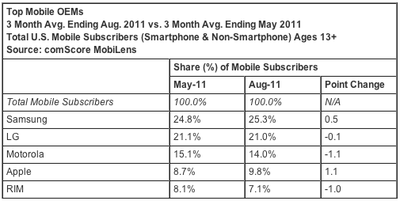 Looking specifically at smartphones and measuring platforms instead of manufacturers, Apple checked in at 27.3% of the market, up 0.7% over the prior period but trailing Android's 5.6 percentage point growth.

The reports also highlight the rapid deterioration in Research in Motion's market share. Apple and RIM had been neck and neck in share just four reports ago, covering the February-April 2011 period, but RIM has fallen to under 20% of the smartphone market as Apple has surpassed 27%.

comScore's surveys track installed user base rather than recent sales as tracked by many other firms. As a result, comScore's numbers react more slowly to changing trends in mobile phone sales than shorter-range measures of recent sales. But comScore's numbers would be more accurate reflections of actual consumer usage given typical upgrade cycles on the order of 18 months for average users.

Well, I can tell you that the Google install base will be going up thanks to me. :D

It's been fun with with my iPhone 3G and iPhone 4, but I think it's time for me to move on to something new. Android here I come. Doesn't anyone feel this way?


You won't know how much Android sucks until you try it for yourself. :-)

While there are many people that feel that way, I know just as many that are ready to come back to the iPhone 4S after owning an Android device.
Score: 10 Votes (Like | Disagree)

Well, I can tell you that the Google install base will be going up thanks to me. :D

It's been fun with with my iPhone 3G and iPhone 4, but I think it's time for me to move on to something new. Android here I come. Doesn't anyone feel this way?


No! I use several different Android phones from different manufacturers at work. The battery life is abysmal with all of them. I love the feature in Android that when an app crashes that causes the OS to freeze up I am forced to remove the battery to get it to restart. I guess there is more than one reason to have a removal battery.

Sorry but given my first hand experience with Android phones I have no desire to buy one. And yes I have used the Samsung Galaxy S II.
Score: 8 Votes (Like | Disagree)


Then why did Apple have their best quarter of sales yet with it in the last months ? :rolleyes:
Score: 7 Votes (Like | Disagree)


The average person is not aware to rumors and rumblings like those of us on MR.
Score: 6 Votes (Like | Disagree)


Well they can kiss that percentage goodbye after yesterdays crappy announcement ...


The thing announced yesterday that will affect the percentage the most is not the new 4S. It's the lower prices on the 4 and the 3GS.

The 3GS was already a top selling model last quarter, better selling than all or nearly all of the current Android models. The zero up-front subsidized price on the 3GS price will boost iPhone market share in the U.S, even if the 4 and 4S together barely hold the percentage they had last month.
Score: 5 Votes (Like | Disagree)

sugarbear
Between the free 3GS, the $99 iPhone 4, and greater availability, Apple's legitimately making a market share play... and is gonna snap up much of the lower-end market where Andriod was winning.

The high-end folks (most of us on MR) might be disappointed with the 4S, but the lower end of the market is rubbing their hands with glee.

Wait until you see the market share pie charts for next year. The strategy will become evident.
Score: 4 Votes (Like | Disagree)
Read All Comments

Wednesday May 5, 2021 1:29 am PDT by Tim Hardwick
Encrypted messaging app Signal has had a series of Instagram ads blocked from the social media platform, after it attempted to show users how much data the Facebook-owned company collects about them and how it's used to push targeted ads. In a blog post, Signal described how it generated the ads to show users why they were seeing them, simply by declaring upfront the information that the...
Read Full Article • 96 comments