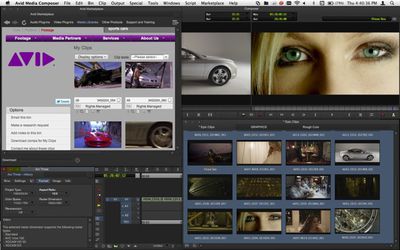 Media Composer version 6, Symphony version 6 and NewsCutter version 10 are rebuilt from the core on an entirely new open, 64-bit architecture that raises the bar for performance, flexibility and productivity. With this version, Avid is also introducing a sleek, new User Interface—designed to speed workflows while simultaneously preserving the same functionality that so many professionals have built their careers on.

Media Composer Academic 6.0 starts at $295 for educational institutions and students.

Avid continues to offer a discount to Final Cut Pro (not FCP X) users who switch to Media Composer. The company is offering Media Composer 6 plus free online training to help users move from FCP for $1499.

The company says it is "investigating" the Mac App Store as a distribution point for its software, but has nothing to announce yet. Media Composer 6, Symphony 6, and NewsCutter 10 will be available on November 15.


My company pays 3500$ per machine just for the development environment, plus around 30,000$ per CPU for the production environment's software. Not all software is 0.99$. Especially for corporations.

You do realize that Apple's prices don't really mean anything? They buy 25k costing software and sell it for 1k. They've done it many times before. Apple cuts prices so they can sell Macs because their software doesn't run on Win/Linux.

The people that make the content that you consume (and probably take for granted).
Score: 11 Votes (Like | Disagree)


TV and Production people think that those prices are cheap! They are used to paying MUCH more.
Score: 10 Votes (Like | Disagree)

I just cut together a major project on Final Cut Pro X. It was a multicam project. In some scenes there were 6 shots up at the same time. I also assembled animation in it, quite a few titles, had to color correct everything quite a bit because of a lighting issue, etc.

Final Cut Pro X worked great. In fact, in the 20+ years I've been editing this has been the best experience ever. BY FAR.

FCPX takes all of the drudge out of editing and you can work at the speed of your thoughts. Its a dream!

Sure, there isn't that silly live type that FCP used to have.... but if you think you're a "professional" and not having live type is a problem, I've got news for you: You're not a professional.

I think there are some areas where it can be improved. While livetype was a gimmicky feature, the type system needs more flexibility. I used motion to do a custom opening sequence (and it worked great) but I don't want to go to motion all the time... though we're just creating a couple bumpers and titles that we'll use all the time, type in FCPX sans motion could be improved.

And I ran into a couple bugs.

I know there are editor assistants-- trained button pushers-- people who don't understand technology and thus it will take a long time to teach them how to use FCPX because even an intuitive interface doesn't work for them because to be intuitive they have to understand what video is... but these are people who were never going to advance much in their career anyway, and they're a small part of the market (but obviously noisy.)


Ok, wow, there is SOOOO much gold here, I don't even know where to start.

Assistant editors are trained button-pushers who don't really understand technology!? LMFAO!!!! Dude, this alone has revealed the level at which you work. Anyone who has worked in the business in Hollywood will tell you that typically AE's know the software FAR better than editors, and spend most of their time cleaning up after them and correcting their mistakes. I know this, because I've WORKED as an AE in Hollywood.

People weren't complaining about FCPX because it got rid of LiveType... It's because it got rid of very important professional features like OMF, and XML, to name a few... Most pros don't do their own titling... we leave that to professional Motion Graphics guys, and just use a basic text generator or still made in photoshop as a placeholder until we get the real deal from then MoGraph guys, which the AEs then cut in and we approve, or don't do anything with at all because by that point the cut has been locked and we've moved on to another project. Guess what - we don't color correct either. That's for Colorists to do. Sound? Yup. We have pros do sound too. This isn't to say that an Editor can't be good at these things and cannot do these things... but specialists are typically better, and that's the way it works in Hollywood. The fact that I've had to TELL you all this tells ME that you really have no idea what you're talking about.

Indie work? Student and amateur films? Sure, I'm sure it's just fine - but this is not really pro level stuff, is it? FCPX may be a great editing tool, but it's just not ready for the big-leagues. It's entirely irrelevant how pleasant it is to cut with if the AE can't send my work to the Sound guy, or the Colorist, or even put it to tape without some sort of ridiculous workaround. Apple eliminated CRUCIAL professional level features from FCPX, and that's precisely why NOBODY in the business is using it.
Score: 8 Votes (Like | Disagree)
Read All Comments