MacRumors had previously revealed some interesting changes coming to Apple Retail stores this Thursday. These changes include an expansion of the ability to pick-up online orders at Apple Stores as well as a surprising new self-check out capability. These new features will be released as an update to the Apple Store App in the App Store. 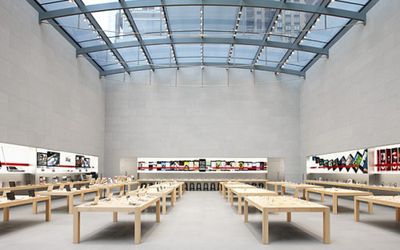 As reported on BGR, the new system works as follows:

Online Orders with In Store Pickup and Returns

- For standard in-stock items, the product will become available to pickup in about 12 minutes. This provides the system enough time to send the order to the store, and allow Apple Retail employees to set aside items for pickup. Customers will be able to skip lines, and simply have to sign for them and leave.
- For build-to-order, engraved devices or other out-of-stock items, Apple will ship the items to your local Apple Store for free. Customers will receive a pick-up date and a push notification to the App will let you know when it has arrived. Again, 12 minutes from the push notification, the order will be ready for pickup
- Apple expects the majority of customers will eventually use in-store pick up for buying products.
- Customers will be able to return items purchased online to retail stores.

This is an even more interesting feature that Apple is deploying that will help streamline the Apple retail experience. Apple will be allowing customers to use the Apple Store app to buy smaller items such as accessories while in the store. Customers won't have to even talk to a retail employee:

Here is how this will work: after you find the item you want to buy, like an accessory, you launch the Apple Store app on your iOS device and there will be an option to buy a product in the store. You scan the product with the camera on your device in the app, click purchase, and it will charge whatever credit card is associated to your Apple ID. You then just walk out of the store.

According to BGR, Apple will not be manually verifying purchases.

Both In-Store Pickup and Self Check Out are expected to be launched on Thursday, November 3rd worldwide.

How will Apple employees know if someone is shoplifting?
Score: 31 Votes (Like | Disagree)


Easy. Each item has a unique RFID tag. When you make the purchase your phone sends a message to the store notifying the systems to let that RFID tag through the detectors.
Score: 19 Votes (Like | Disagree)

aluren
Time to grab some free cases and headphones... ;)
Score: 18 Votes (Like | Disagree)


Probably the one that goes off whenever Bill Gates tries to leave a brown Zune behind on the store counter.
Score: 14 Votes (Like | Disagree)

IbisDoc
Thank goodness there will no longer be a need to wait 20 minutes for an annoying salesperson to stop chatting with his high school friends and actually (gasp) allow someone to make a purchase.
Score: 14 Votes (Like | Disagree)

At the store where I worked we had plainclothes security and cameras all over. Plus, employees always kept an eye on people. Not that hard.

Beyond that, Apple is probably making enough money on the computers and "big" items that a few cases or iPod cables getting stolen is not really a big deal.

So how is your plainclothes security, cameras and force attuned employees going to tell that someone isn't just holding their phone up like they are buying an item in-app when they're not?
Score: 13 Votes (Like | Disagree)
Read All Comments

Wednesday September 28, 2022 4:27 pm PDT by Juli Clover
The Dark Sky weather app that's owned by Apple is no longer available for download in the U.S. App Store, suggesting that it has been removed ahead of schedule. Apple acquired Dark Sky back in March 2020 and has since incorporated elements of the app into the Weather app available on the iPhone (and soon, the iPad). Dark Sky remained available for purchase as a standalone weather app...
Read Full Article • 148 comments

Thursday September 29, 2022 7:44 am PDT by Juli Clover
The iPhone 14 Pro and Pro Max introduce some major improvements in camera technology, adding a 48-megapixel lens and low-light improvements across all lenses with the new Photonic Engine. We've spent the last week working on an in-depth comparison that pits the new iPhone 14 Pro Max against the prior-generation iPhone 13 Pro Max to see just how much better the iPhone 14 Pro Max can be. Subscrib ...
Read Full Article • 83 comments

Thursday September 29, 2022 12:38 pm PDT by Juli Clover
Tony Blevins, Apple's vice president of procurement, is set to depart the company after he made a crude comment about his profession in a recent TikTok video, reports Bloomberg. Blevins was in a video by TikTok creator Daniel Mac, who was doing a series on the jobs of people he spotted with expensive cars. After seeing Blevins in an expensive Mercedes-Benz SLR McLaren, Mac asked Blevins what ...
Read Full Article • 238 comments