Apple has sent an email out to developers informing them that iTunes Match music libraries in iCloud will once again be wiped on Thursday, October 27th. Apple instructs developers to turn off iTunes Match on their computers and iOS devices during that time. 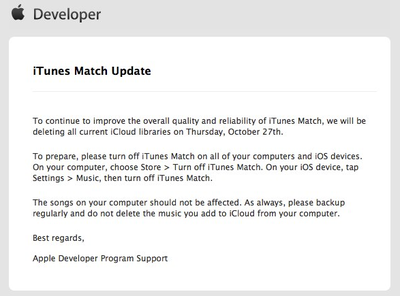 The wipe may be in preparation for the public launch of iTunes Match. The service was originally to be launched alongside iOS 5 but was pushed to the "end of October". iTunes Match remains in beta testing with developers, and there's been evidence that Apple has been quietly preparing for its public launch.

Last week, an iTunes Match toggle has appeared in the iOS 5 Music Settings pane, which directs users to subscribe to the service using iTunes. Apple has not yet publicly released an updated version of iTunes that allows users to sign up for this feature.

iTunes Match is a $25/year subscription service that will match your existing iTunes library with 256-Kbps versions in the iCloud. These songs will become available for download on your other Macs or iOS devices through iCloud.

Here’s how it works: iTunes determines which songs in your collection are available in the iTunes Store. Any music with a match is automatically added to your iCloud library. Since there are more than 20 million songs in the iTunes Store, most of your music is probably already in iCloud. All you have to upload is what iTunes can’t match. Which is much faster than starting from scratch. Once your music is in iCloud, you can stream and store it on any of your devices. Even better, all the music iTunes matches plays back from iCloud at 256-Kbps AAC DRM-free quality — even if your original copy was of lower quality

I hope for all Itunes Match users' sake that Apple is fixing this screwed-up system so that non-destructive upgrades are supported.

It's "amateur hour" to have to wipe the database for an upgrade.

This isn't even tolerable for the beta - non-destructive upgrades should have been designed in from day one.


You were told this from day one. It's a DEVELOPER PREVIEW, and Apple consistently states that you should never use developer environments for production data. Besides, for buying into the Dev version Apple gave you 15 months for the price of 12. Quit your childish whining.

But why, unless you're more concerned with the logo on a product than its specs and performance?


That's churlish troll talk. Can you give it a rest?

If you plan to support upgrades in the product, the Beta should support and test upgrades.

Anything less is lazy programming.

If your tools can't move the beta database to the production servers without "porting problems over", then your tools are bad.

"Itunes Match" has "train wreck" written all over it - how many times have they wiped the database to date? Why should we not take that as a warning that the design has fundamental flaws?


Spoken as someone who definitely doesn't rely on a dev/production model to make his living...
Score: 10 Votes (Like | Disagree)

I hope for all Itunes Match users' sake that Apple is fixing this screwed-up system so that non-destructive upgrades are supported.

It's "amateur hour" to have to wipe the database for an upgrade.

This isn't even tolerable for the beta - non-destructive upgrades should have been designed in from day one.


Dude, you don't even know what they are doing. Maybe they are moving to production servers and don't want to have problems ported over that may have sprung up during testing. You always want to go to a clean slate when you are going from Beta to Production.
Score: 7 Votes (Like | Disagree)

Actually, detecting duplicate playlists would be rather simple.

Have you ever written code using an "IF" statement?


And you don't know about the software that I wrote that you use every day, nor about the patents that I have been granted, or how to design maintainable software. (Hint: if you intend to support upgrading the released software - consider supporting upgrades of the alpha software. By the time it reaches beta, you'll have it working.)


You may write software, but I do QA for a living. If you guys wrote flawlessly from the start, I wouldn't have a job. So thanks. :)

I'm not surprised Match is being wiped several times. We often have our backends reset when we migrate from Alpha->Beta->Live, and we're not even a large outfit.
Score: 5 Votes (Like | Disagree)

Actually, detecting duplicate playlists would be rather simple.

Have you ever written code using an "IF" statement?


Ha, you make me laugh! The "if" statement? Really?

It is not that simple, not only would you have to create playlist objects but check the data in that playlist object to make sure it is the same, and within that data (songs) there is more that you have to compare to make sure it is the same object. And when you are comparing lets say 30 songs per playlist, with 20 playlists, and 1,000 duplicates you are creating > 600,000 "if" statements for a single user. (You obviously wouldn't use an if statement) And that is just going by lets say a track name. If you have to compare 2 tracks in order to see if it is the same song you would have to compare at least 5 more things. (Title, artist, time, composer, release date, other) and that would make > 3,000,000 comparisons.
This is just some stupid example I made up.


If your tools can't move the beta database to the production servers without "porting problems over", then your tools are bad.


You have no idea what you are talking about, if during development you have a bug that replicates a users playlist 1,000 times you DO NOT want to bring that data over to a production server. It would be almost impossible to port the data over reversing the effects of the bug.


Spoken as someone who definitely doesn't rely on a dev/production model to make his living...


Just ignore him, obviously he is not a developer or knows anything about programming.
Score: 5 Votes (Like | Disagree)
Read All Comments