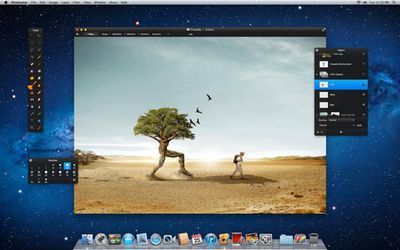 The new version of Pixelmator includes support for a number of Lion features, including Full Screen, Auto Save, and Versions. It also includes an advanced healing tool, similar to Adobe Photoshop's Content Aware-Fill technology, moving an advanced feature into a brand new price point. The Loop has some additional screenshots.

Pixelmator 2.0 will be initially priced at $29.99, though the regular price will be $59.99. The Pixelmator team told us they hadn't decided exactly when the price will rise. Version 2.0 will be available on the Mac App Store tomorrow.

I wish the mods on this forum would at least temporarily ban you for making such ridiculous comments for guest and other members to read. I mean it when I say your posts are OFFENSIVE. They are an insult to my intelligence and others. This one is especially an insult to every graphic designer whos spent more than 5 minutes and 30 dollars on getting to a professional status.

Funny, this is kind of how I felt after reading your screed, but I don't need the moderators to ban you.

I work with pros and I work with amateurs and bar none know-it-all pros (who don't) are the worst to deal with.

Not every pro works in the same way on the same content with the same needs, therefore not every pro is alike. Pixelmator will meet the needs of some and will not meet all the needs of others--fine. These same arguments are swirling around FCPX. I use it for some thing, 7 for others, and Premiere for yet others. In some shops X is a flat out no go--I see that, but in other cases it's a terrific tool. On the Creative Cow forums right now is a thread on how FCPX is being used for the current World Series broadcasts--seems pretty professional to me. Same with Pixelmator.

Wikus, stop being so close-minded and condescending to other tools and solutions (and people). Frankly, that is not "pro" behavior and I would not hire anyone who acted that way--it demonstrates a lack of mental flexibility that I expect for problem-solving, let alone being in the field of creativity. And it just comes off as jerky.

Ive used pixelmator enough both on my own installation and my dads to know that it lacks any kind of professional use. I have photoshop, therefor I have no need for pixelmator.

The fact that you are getting angry with anyone saying Pixelmator is good is ridiculous. You left a huge rant against LTD about his "apple fanboyism" but you are the complete opposite and cannot give credit where credit is due.

Not to mention the "you get what you pay for" doesn't hold water here. Tell people who purchase CS3 or CS4 that. I'm pretty sure they all feel ripped off as they were horrible iterations of CS.

Another thing is real pros don't stick to one tool, they use the tools they need to get the job done. If one program does something better than another the pros will use it. If you limit yourself to only photoshop you will be missing a lot of potential workflow improvements. Photoshop is a great tool, but its far from the best at everything.
Score: 13 Votes (Like | Disagree)

Does this program do something that PS can't?

Adobe needs to recode all their products with a revamped interface, speed, make it stable, and lower their prices.
Score: 13 Votes (Like | Disagree)

As a graphic designer, pixelmator is for noobs. I'd never use it for work.


"Noob", while a derogatory term, implies the level of skill at the user, not the required features aforementioned user is required to complete a certain task. Please stop being annoying.

Thing is, before Pixelmator, there was nothing between the pile of horse droppings that is GIMP, and Photoshop. It has never been, nor will it ever be, aimed to become an industry standard application for use in professional studios.
Score: 10 Votes (Like | Disagree)

free upgrade if the first was bought through MAC APP STORE ONLY?? i bought it before the app came to the app store, or the app store even existed. Would about the early adopters??? how come i don't get a free upgrade?? unless I'm misunderstood...


The purpose of the upgrade was only to get people who otherwise would have waited for 2.0. It wasn't designed as a "if you buy version n, you'll always get version n+1". I imagine they wanted to get a proof of concept on the App Store, before deciding to go 100% App Store only for the general release of 2.0. The free upgrade path allowed them to get a fair number of new users (who otherwise may have waited until 2.0), as well as existing users that liked the idea of (legally) using Pixelmator on multiple machines. Pay for that privilege now, get the (more compelling purchase motivation) 2.0 upgrade later.


NOBODY in the industry uses pixelmator. Waltz into any professional agency or studio and 100% of the time they will be using Adobe CS and I stress the word PROFESSIONAL because I strongly believe you don't understand what professional means in the real world.


See, the problem with making a 100% claim is that it only takes 1 instance to prove that you're wrong. So: you're wrong. I'm a developer, and I use Pixelmator for 90% of my PSD editing. I'm not a designer, but I'm a person that is manipulating PSD files PROFESSIONALLY. It does everything I need it to, and at a significant price savings. Previously, every person in an agency that needed to work with PSD files -- UX, Design, Project Managers, Developers, Creatives -- ALL needed to have Photoshop. Now, only the Designers really need it. Most, if not all of the other people can be perfectly fine using Pixelmator. That's a HUGE market. And the difference from Photoshop Elements to Pixelmator is huge, if for no other reason than PSE _still_ can't open layer groups.
Score: 8 Votes (Like | Disagree)

scottrichardson
As has been said by many pro web guys, we can't move from Photoshop to Pixelmator fully until Pixelmator supports a full suite of non destructive layer styles:

Unless I missed something this release still doesn't have layer styles? I am a happy owner of v1.6, but it's just frustrated me each time I have tried to do a full web layout in it quickly. Believe me when I say I am VERY KEEN on switching from the hog that is photoshop to pixelmator. I ditched Dreamweaver a couple of years ago in favour of Espresso and can never, ever go back.