iPhone 4S Component Costs Once Again Begin at About $188 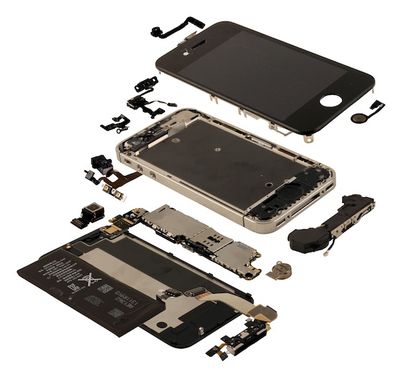 AllThingsD reports on IHS iSuppli's teardown analysis of the iPhone 4S, with an eye toward estimating the cost of components included in the device. Based on iSuppli's analysis, the 16 GB iPhone 4S carries a bill of materials cost of about $188, in line with that of the GSM iPhone 4 at launch.

In the case of the iPhone 4S, [IHS iSuppli analyst Andrew] Rassweiler estimates that the BOM cost ranges from $188 for the 16 gigabyte version of the iPhone 4S to $207 for the 32GB version and $245 for the 64GB version. Apple and its carrier partners sell the phones for $199, $299 and $399 respectively, typically with a two-year contract for wireless service that carriers use to subsidize the cost they pay Apple.

While we've already seen a couple of iPhone 4S teardowns from iFixit and Chipworks, IHS iSuppli highlights a few new items of note.

- While iFixit found Toshiba flash memory in its iPhone 4S unit, IHS iSuppli expressed some surprise at finding Hynix memory in its unit. Apple has, however, sourced flash memory for various devices from Hynix for many years, although the company's products have apparently not been seen in recent iPhone models. But with flash memory being a relative commodity in the hardware market, Apple typically sources the chips from a variety of vendors based on pricing and volume requirements.

- IHS iSuppli was unable to determine the manufacturer of the iPhone 4S camera module, as the part contained no identifying information printed on it. Chipworks had determined in its teardown that the camera sensor was made by Sony, but it is unclear if Sony is splitting sensor production loads with Apple's longtime partner OmniVision. Regardless, IHS iSuppli estimates the cost of the camera module at $17.60.

Component costs for Apple's entry-level iPhones have typically come in between $170 and $190, offering the company a hefty margin when the $199 purchase price and extensive carrier subsidies are accounted for. But it is important to note that bill of materials cost estimates account only for the cost of the individual hardware components used in the device. The estimates do not include other costs involved in product development, manufacturing, and sales, such as research and development, software, patent licenses, marketing, and distribution expenditures.

That isn't a very good margin at all. Most companies aim for an 8-10x margin, not 3.


Where did you get that incorrect fact from?
Score: 10 Votes (Like | Disagree)

Uh, no. This is simply the cost of parts. It doesn't include manufacturing costs, patent/royalty costs, marketing, R&D, packaging etc.
Score: 10 Votes (Like | Disagree)

No, Apple also has to pay the manufacturers to build it. They have to pay for all the advertising and marketing that's gone into it. They also have to pay for the initial research, development, testing, etc.

There are much more costs involved than just the parts to make it.
Score: 8 Votes (Like | Disagree)


what are you talking about????? those things actually cost money? :eek:
Score: 7 Votes (Like | Disagree)

Nobody wants that much internal storage. SD card does the exact same thing for a fraction of price. 16GB costs $200 on contract which is reasonable. $400 for 64GB is twice the cost of 16GB which is too much.


I think I'll let the market speak rather than take your opinion of what the market wants.
Score: 6 Votes (Like | Disagree)

Where did you get that incorrect fact from?