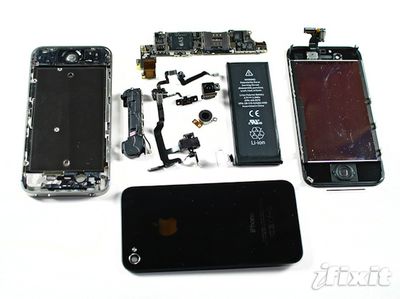 iFixit has already begun a high-quality teardown of the iPhone 4S, and while a considerable number of the internal parts have already been seen in leaked parts prior to the device's launch, a more thorough look at the individual components should provide some interesting details on the device.

The teardown is still just getting underway, with iFixit's technicians having opened up the device, examined the battery and pulled out the logic board, but we'll update this post with additional information as the teardown progresses.

- The baseband chip is a previously-undisclosed Qualcomm MDM6610, an apparent variation of the MDM6600 used in the CDMA iPhone 4 and other devices. It is unclear at this time what differentiates the MDM6610 from the MDM6600.

- As noted by AnandTech, the part number found on the A5 chip in iFixit's teardown confirms earlier claims that the iPhone 4S carries 512 MB of RAM.

- Chipworks is following along with iFixit's teardown and providing a closer look at the chips discovered inside the iPhone 4S. Many of the chips had already been found in other devices, and Chipworks publishing die photos and other details on them as the information is gathered.

HarryKeogh
My God. It's full of clouds.
Score: 35 Votes (Like | Disagree)

*LTD*
I'm surprised Siri allowed them to undress her like that.

Feels like the hardware team took a vacation while the iOS devs made Siri. Lame strategy.

That is absurd and unfounded.

1) The reality is iOS was a few more years advanced when Android was announced so Google had a lot of catch up to do. So maybe it appears Google is out engineering Apple b/c they push out updates faster, but it's only an illusion. iOS is still superior to Android even if Android had a few better features. Google also isn't that involved in actual hardware development. It's up to the hardware makers to tweak Android for many of the specs it employs in a given model.

2) Android hardware is very uneven because of its openness. Some phones can't even be upgraded at all to the latest and greatest -- even as Android proponents carp that Siri isn't included in iOS 5 for phones other than the 4S. Other phones are not compatible with many apps in the Android App store.

3) Hardware is only half of a phone. Their are plenty of beautiful Android phones, especially some of the early models, that frankly were not practical because the guts were so half-baked.

4) "Lame strategy" as you call it doesn't yield 1m pre-orders and who knows how many snaked lines at tomorrow's launch. If Android were significantly more attractive (in usability and design) -- even just one model, then it seems at least a good chunk of 4S buyers would have gone that route. I doubt all the 4S buyers are just upgrading from previous iPhones b/c the way subsidized phone upgrades are staggered.

5) Google via the Motorola purchase may catch and surpass Apple at some point in the near future but it's crass to say Apple is taking a nap or that it's resting on its laurels. Sales to a wide array of consumers just do not bear that sentiment out.
Score: 12 Votes (Like | Disagree)

What will happen is predictable: blockbuster sales and top marks in consumer satisfaction. The usual. Why? See above.

Apple does a helluva lot more with less. Again, we go right back to User Experience rules. Rule #1: never license your OS to everyone and their dog. The only truly optimized experience comes from vertical integration, the kind that Apple practices.

That is why a comparatively under-specced iPhone performs vastly better than the competition.
Score: 11 Votes (Like | Disagree)
Read All Comments