Tim Cook "Not Religious" About Holding Cash; 66% of Apple's $81B in Cash is Held Overseas

It's a frequent parlor game amongst Apple analysts and watchers to guess and suggest and hypothesize what Apple should do with its huge and growing cash reserves. As of September 24, 2011, Apple is sitting on $81.57 billion in cash. Apple added $5.4 billion to its cash reserves in the last 3 months, and that would have been significantly higher if, as Horace Dediu points out, not for the more than 6,000 Nortel patents Apple purchased the rights to. 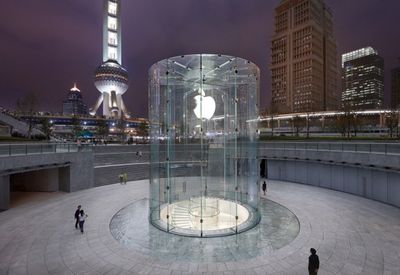 Cook noted that in recent months Apple had acquired several companies, acquired intellectual property, invested in the supply chain, and invested in new stores. In his first comments as CEO about the cash pile Cook said he wasn't "religious about holding or not holding cash," but Apple would continually ask ourselves what is in Apple's best interest and act accordingly.

"It's a topic for the board on an ongoing basis and we will continue to discuss it," Cook said in response to an analyst question. Apple CFO Peter Oppenheimer jumped in after Cook was finished answering the question, to point out that more than two-thirds of Apple's $81 billion cash pile was sitting offshore.

The question of offshore cash is an important one, as explained by Reuters:

The U.S. government taxes U.S. businesses on income earned worldwide, but allows them to defer taxes on the money until it is brought back to the United States. As a result, American corporations like to keep the money abroad, particularly as they increase investment overseas.

A number of companies, led by Apple, Google and Cisco have been pushing for a tax holiday on overseas cash holdings to allow the companies to repatriate the money to the United States tax-free.

hobo.hopkins
It's too bad that the American tax system incentivises not bringing the money back into the United States.
Score: 23 Votes (Like | Disagree)

42streetsdown
They could spend some of that on building an apple store closer to me.
Score: 17 Votes (Like | Disagree)

So you would rather they not pay taxes on earnings?


Did I say that? I just said that it's a shame that the tax system doesn't incentivise bringing back money from overseas. Incentives could be a temporary lower rate to provide instant benefits, for example. I didn't say they shouldn't pay any taxes; I believe that's creating a false dilemma.
Score: 12 Votes (Like | Disagree)

Robbrinson
Why pay the 12 big ones to our Govt? They will just stimulate a few ill conceived green energy initiatives, bail out a bank, or get a new campaign bus from Canada (sorry McFrankshe). Just use it to delevop a smaller iPad.
Score: 7 Votes (Like | Disagree)

Juan007
All of this money was earned overseas, ex. China sales. Why should Apple pay US tax for goods made and sold in China? The net effect is that the money stays offshore and never gets invested back into the US. A disaster of a tax system.
Score: 7 Votes (Like | Disagree)

TheMirrorsTruth
Funny how the U.S. can tax revenue that never actually existed in the U.S. Gotta love "repatriation!"
Score: 7 Votes (Like | Disagree)
Read All Comments