While a few committed individuals have been camping out for the iPhone 4S for some time now, others are now beginning to filter toward their local Apple retail stores in their attempts to secure one of the new models first thing tomorrow morning.


We've yet to hear much from Australia, where stores in the eastern part of the country will be the first to open for iPhone 4S sales just a few hours from now. But lines are already long in Japan, another early launch market for the device, with Guillaume Erard reporting that there were over 100 people in line at Apple's Shibuya retail store in Tokyo a full 11 hours before launch time. 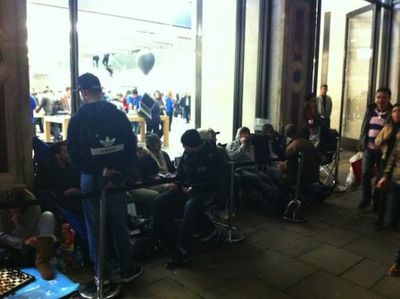 iPhone 4S line at London's Covent Garden retail store (Thanks, Mike!)
Things still appear to be relatively quiet in the United States and Canada nearly 17 hours before the first launches, as we've been receiving scattered reports of lines beginning to form but with only a handful of people encamped at most of the stores from which we've received reports.

MacRumors forum members looking to organize meetups for the iPhone 4S launch are getting together in our dedicated forum.

Update: MacRecord noted earlier today that there were over 100 people (and now up to 150) in line at the Opéra retail store in Paris.

Update 2: Apple co-founder Steve Wozniak is reportedly the first and only person in line so far at the Los Gatos retail store in California.

nwcs
Maybe I ought to head over to Apple Store when my preorder gets here tomorrow and walk to the line and say, "Siri, why didn't these people preorder?" :p
Score: 25 Votes (Like | Disagree)

Why the heck can't they give these people numbers and tell them to come back tomorrow? Seems cruel to make them wait all night when all the store needs is proof they were there first.

They're already putting out barriers and such, so they obviously have the fact that people will be waiting in mind. Is it that hard to set up a ticket system?


The thing is the store would need to set a time to start giving the tickets out, otherwise people would be there a week early to pick the tickets up.

So if there is a set time that the tickets get given out, people would line up hours in advance for the tickets.
Score: 16 Votes (Like | Disagree)


Aside from the processor, ram, camera, antennae, etc. etc. Oh, and there are lots of people who never bought the iPhone 4.
Score: 12 Votes (Like | Disagree)

At the Apple Store, The Gateway in Salt Lake City there is a line. I am in it. People have been here since 10:00 p.m. MT on Wednesday.


Fantastic! So can you tell me why someone would wait 48+ hours in a line to buy an item that could be ordered online and delivered directly to them?
Score: 10 Votes (Like | Disagree)

benhollberg
At the Apple Store, The Gateway in Salt Lake City there is a line. I am in it. People have been here since 10:00 p.m. MT on Wednesday.
Score: 9 Votes (Like | Disagree)

HarryKeogh
Maybe if I was 18 or so this would interest me. Making an experience out of it and all. But at 40 years old I'd rather eat poison or be stuck in a two-year Droid contract than wait in line overnight.

This old man needs his sleep.
Score: 8 Votes (Like | Disagree)
Read All Comments

Thursday September 29, 2022 7:44 am PDT by Juli Clover
The iPhone 14 Pro and Pro Max introduce some major improvements in camera technology, adding a 48-megapixel lens and low-light improvements across all lenses with the new Photonic Engine. We've spent the last week working on an in-depth comparison that pits the new iPhone 14 Pro Max against the prior-generation iPhone 13 Pro Max to see just how much better the iPhone 14 Pro Max can be. Subscrib ...
Read Full Article • 134 comments