Research firm comScore today announced the results of its latest study of digital media consumption in the United States, perhaps unsurprisingly finding that the iPad has continued to dominate the tablet industry and has even quickly overcome the iPhone's headstart to lead it in total traffic. Among iOS devices, the iPad is now responsible for more U.S. Internet traffic than the iPhone, taking the title by a margin of 46.8% to 42.6%.

Perhaps most notably, the iPad continues to dominate the U.S. tablet industry even as numerous high-profile competitors have introduced (and in some cases already discontinued) their own tablet products to take on the iPad. According to comScore, the iPad accounted for 97.2% of U.S. Internet traffic, as measured by browser-basd page views, from tablet devices over the June-August period. 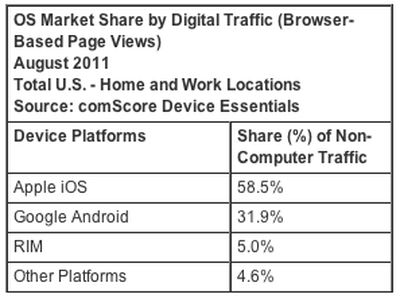 Looking at the broader tablet and smartphone market, iOS as a whole represented 43.1% of the installed user base for connected devices in the United States over the study period, with Android placing second at 34.1%. But in looking at traffic from those devices as a gauge for how much they are being used, iOS takes a commanding 58.5% of the market while Android dips to 31.9%.

Apple fans have frequently pointed to the company's strong performance with the iPad and iPod touch as data that should be included when comparing the relative adoption of iOS versus Android. And given that Android has yet to take off in the tablet and non-phone connected device markets, iOS continues to hold a sizable lead in overall platform comparisons despite Android's rapid ascent in the smartphone portion of the market.

HarryKeogh
The remaining 2.8% of tablet traffic is people visiting Apple.com on their Xoom to order an iPad.
Score: 31 Votes (Like | Disagree)

GBrooks
RIM at the bottom? Not surprising, used a BlackBerry to surf the web last week, and I wanted to die/ kill it with fire.
Score: 8 Votes (Like | Disagree)

I bought the iPad for one task - simply to use it as a digital portfolio of photos. It has become so much more for me.
Score: 6 Votes (Like | Disagree)


75% (whatever the actual percentage is i don't recall) is for tablets "shipped" so this 97% number is a confirmation that all of this competitors tablets are actually sitting on the shelves.
Score: 6 Votes (Like | Disagree)


Because the iPad is so much better than other tablets that iPad owners tend to use them a lot. 25% of tablet owners may have something else, but it sits around collecting dust because it's such a piece of junk.
Score: 6 Votes (Like | Disagree)

The problem is that Android OEM/Google talks about shipped products and activations. Apple talk about sales.

The strange thing is that just 0.9% of Android devices that visit Android market are tablets. That would mean about 1.35 million Android tablets sold. Apple have with Q4 sold about 40 million iPads. So 97% is more accurate then 60% market share.

There is only 3 reasons to buy another tablet then iPad.
1) All pirate stores that let you install all apps for free on Android. (black market app)
2) Its not Apple
3) Panic sales like the HP tablets and Kindle fire that is sold at a loss.
Score: 5 Votes (Like | Disagree)
Read All Comments

Sunday January 23, 2022 10:32 am PST by Juli Clover
Apple is working on a number of new products that are set to launch this fall, and Bloomberg's Mark Gurman says that it will be "the widest array" of new devices that Apple has introduced in its history. In his latest "Power On" newsletter, Gurman explains that Apple is working on four new flagship iPhones (iPhone 14, iPhone 14 Max, iPhone 14 Pro, and iPhone 14 Pro Max), an updated low-end Ma...
Read Full Article • 251 comments

Monday January 24, 2022 9:20 am PST by Juli Clover
AT&T today announced the launch of upgraded AT&T Fiber plans, which support speeds of up to 5 Gigabits for some customers. There are two separate plans, one "2 GIG" plan and one "5 GIG" plan, available to new and existing AT&T Fiber subscribers. According to AT&T, the new plans are available to nearly 5.2 million customers across 70 metro areas including Los Angeles, Atlanta, Chicago, San...
Read Full Article • 221 comments