Apple has built significant antenna upgrades into the iPhone 4S, saying in the press release announcing the phone that it is the first phone to intelligently switch between two antennas to send and receive. We spoke to Spencer Webb, owner of AntennaSys, about the antenna history of the iPhones. He wrote extensively about the AntennaGate issues with the original iPhone 4 last year.

"With the iPhone 4," Webb explained, around the steel band "we had one cell antenna at the bottom. On the top, we had another antenna for GPS and Wi-Fi." This turned into Antennagate. 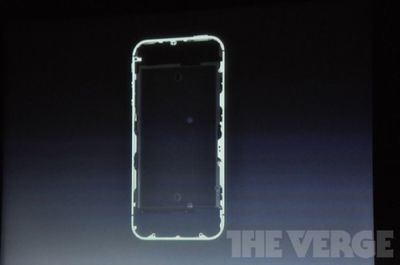 With the Verizon/CDMA iPhone, Webb believes Apple's designers "moved the GPS and Wi-Fi antennas beneath the back glass and turned the top antenna into a second antenna for the cell phone." This brought spatial diversity to the iPhone. This design helps solve the Antennagate problem, because the phone can switch between the antennas depending on signal conditions.

"If you cover up an antenna, you're probably not covering up both antennas," Webb explains. "Spatial diversity on the receiving side is required for use with the Verizon network."

The Verizon iPhone had 'receive diversity' -- it used two antennas for receiving data, but may have only transmitted on the bottom antenna. With the iPhone 4S, Apple claims to have both 'send and receive diversity' for GSM and CDMA. They're using this diversity as the solution to the antenna problem.

"The iPhone 4S may indeed be the first phone to have diversity on both the send and receive sides, and that is a decently big deal. They still have the antenna around the rim, though, so it's evolutionary, not revolutionary."

Image via This Is My Next

Wait, I thought there was no problem with the iPhone 4's antenna. How can Apple fix a problem they claimed didn't exist?


They improved the antenna, it doesn't mean antenna was broken. Indeed iPhone4 receive much more better than 3GS.
Score: 18 Votes (Like | Disagree)

diamond.g
Wait, I thought there was no problem with the iPhone 4's antenna. How can Apple fix a problem they claimed didn't exist?


Can't wait for you to let us know in every single post on the forums today.
Score: 14 Votes (Like | Disagree)


They worked out the kinks, put a brand new processor in it that is twice as fast and consumes the same power, and added a voice recognition system that actually seems to work. If someone installed an engine in your car that had twice the horsepower, got the same fuel economy, and added a brand new GPS navigation system, would you complain?
Score: 13 Votes (Like | Disagree)

chrono1081
I thought the upgrade was great. I don't get why people are disappointed. Technology only moves so fast. This year a speed bump, next year, a redesign, just like the iPhone 4 and 3GS before it.

As an indie game dev I'm excited about the new graphics capabilities, I LOVE the mirrored air play, and the tech demo that Epic released was very impressive.

Siri also has me interested which is funny because originally I thought it would be dumb, then I saw the video...

I also like the improved browsing speeds and storage bump. Very nice (and realistic) upgrade if you ask me.
Score: 10 Votes (Like | Disagree)


So you read and understood the entire press release in less than 1 minute?

I can see by the image it looks quite similar to my current iPhone 4, but I am going to actually read the article and press release before my knee-jerk reaction. ;)
Score: 9 Votes (Like | Disagree)
Read All Comments