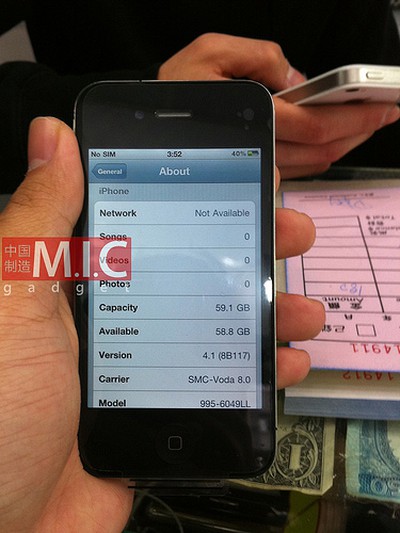 According to 9to5Mac source Mr. X, the upcoming "N94" next generation iPhone is being stocked by Apple in 3 different capacities. The iPhone 4 currently comes in only two capacities: 16GB and 32GB. They are interpreting this to mean that the next generation iPhone will come in 16GB, 32GB and 64GB capacities. However, they can't be certain. The three different sizes could conceivably be 8GB, 16GB, and 32GB, or some other combination altogether. All that is known is that the upcoming "N94" model will be available in three different capacities.

However, this isn't the first time we've heard of a 64GB iPhone. In March, a prototype 64GB iPhone model began making the rounds in China.

The owner of this engineered prototype told us that he got it from a source who has a small quantity of these prototypes. They are definitely leaked from Foxconn's factory in Shenzhen. What's more, according to the owner, he believes that the next iPhone will bring 64GB storage capacity to users.

The circulating model at the time was an iPhone 4 design with 64GB of internal storage, revealing that Apple had been working on such a model at some point.

Apple will be introducing the next iPhone on October 4th during a media event held on Apple's campus. So far, there has been evidence of a revised iPhone 4 model, rumored to be of 8GB capacity, and this N94 next generation iPhone which will be coming in 3 sizes. The N94 carries the same overall look as the iPhone 4, but is believed to incorporate a much faster processor (A5) and better camera (8 megapixel).

strausd
If this is true then Apple will for sure be doing one phone that covers both low and high end. No iPhone 4 as a low end model. They will use this one.

By the way, I think that it will be called an iPhone 5 no matter what. I don't think Apple will say "Here is our new A5 chip, new iOS 5, and new 5th generation iPhone called the iPhone 4S."
Score: 22 Votes (Like | Disagree)

samsandy
YAY finally a 64Gb iPhone!!! I have a massive music library would be nice to get it all on :)
Score: 14 Votes (Like | Disagree)

One new iPhone. iPhone 4S design model. The cases are a distraction. based on what I've heard.


Who is doing the distracting? Apple? I don't know why Apple would get consumers hopes up with some radically different design and then disappoint with a 16 month spec bump.
Score: 13 Votes (Like | Disagree)

Picture of the iPhone above is simply using the jailbreak tweak "fake about screen" which allows you to put in fake values on your about screen: http://www.ijailbreak.com/iphone/cydia-app-fake-about-screen/
Score: 13 Votes (Like | Disagree)

By the way, I think that it will be called an iPhone 5 no matter what. I don't think Apple will say "Here is our new A5 chip, new iOS 5, and new 5th generation iPhone called the iPhone 4S."

yodaxl7
Excited for the 64gb possibilities!!:D
Score: 13 Votes (Like | Disagree)
Read All Comments