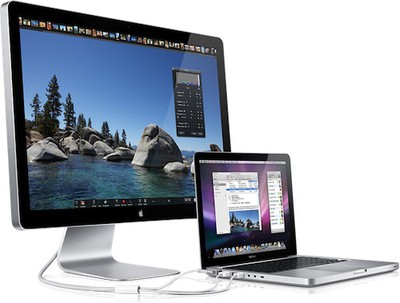 Apple has apparently quietly released a firmware fix for the issue, although the update has not been publicly announced and its existence appears to have only been revealed to a small number of customers who have escalated their issues through Apple's support systems.

A link (.dmg download) to the firmware update was posted to Apple's discussion forums earlier today, and a number of users who have applied the update have reported at least initial success with addressing the flickering issues. Users report having to reboot their systems and power cycle their displays in order for the displays to function properly after applying the update.

IMPORTANT:
This firmware update may not resolve the flickering issue if a Mini DisplayPort extender cable is used.

NOTE:
Some USB and FireWire devices may prevent firmware updates from installing correctly; disconnect non-essential devices and use only an Apple keyboard and mouse to apply the update.

Full instructions for installing the firmware update are also included in the documentation.

It is unclear why Apple has yet to publicly issue the firmware update for all 24-inch Apple Cinema Display users, and thus users should exercise caution in deciding whether to apply the update and prefer to check with Apple support regarding their specific issues.

Update: Apple appears to have pulled the firmware update without explanation.

fekimoki
Apple only care about their new product. What about MacBook Pro late 2008 flickering issue on nvidia 9400M? It's been 3 years, and still no fix.
Score: 6 Votes (Like | Disagree)

Quite some time? The very longest is 8 weeks! the hardware has only been available since July. In this period of time you've had plenty of opportunity to return the product or have it repaired/replaced by Apple.

They'd rather complain than admit they failed to by AppleCare or didn't think it would cover it.

If you pay 1000$ for a monitor, it should at least work when you get it. I would never buy a product with "Apple Care" why should you pay extra, to get a regular warranty, that products must include by LAW.
Score: 5 Votes (Like | Disagree)

Apple only care about their new product. What about MacBook Pro late 2008 flickering issue on nvidia 9400M? It's been 3 years, and still no fix.


Do you have AppleCare? I took mine in for a loose hinge and they ended up replacing my whole screen assembly cause they noticed it was flickering. Not sure if it got to the root of the problem but the screen no longer flickers.
Score: 5 Votes (Like | Disagree)

Apple only care about their new product. What about MacBook Pro late 2008 flickering issue on nvidia 9400M? It's been 3 years, and still no fix.


I have this exact same problem. And apparently so do many others out there too. Just do a search.
Score: 3 Votes (Like | Disagree)

I've had this issue since upgrading my MacBook Pro earlier this year... 23 weeks ago. It's been very frustrating to live with and unpredictable... I didn't take my Mac & Display into the Apple Store, as I figured it'd probably behave itself and waste my time. I'm pleased to hear that some people had their 24" swapped for a 27". Makes me wish I'd taken my set up in and had the same good fortune.

Although I think the fix should've been released months ago, I'm pleased it's now here. I just hope it works!


I called apple help AND took it to an apple store. They treated me like I was lying about it and refused to admit they had a fix or do anything about it.

Glad to see they were lying the whole time. Too bad I sold the cinema display thinking it would never work with my brand new macbook pro. Lost money on the deal too.
Score: 2 Votes (Like | Disagree)

I have this exact same problem. And apparently so do many others out there too. Just do a search.


I had the problem. Just go to Apple and complain. I got my screen fixed.
Score: 2 Votes (Like | Disagree)
Read All Comments

Thursday June 24, 2021 5:45 am PDT by Hartley Charlton
The highly reliable Apple leaker known as "Kang" and a number of other unspecified leakers have reportedly received warnings from lawyers representing Apple. According to posts on Kang's Weibo account, Apple recently commissioned a law firm to send admonitory letters to a number of leakers. The letter purportedly cautioned leakers that they must not disclose information about unreleased...
Read Full Article • 158 comments

Wednesday June 23, 2021 9:16 am PDT by Sami Fathi
Apple may include an under the screen Touch ID sensor for some models of the 2022 iPhones, according to credible Apple analyst Ming-Chi Kuo. In an investor note today obtained by MacRumors, Kuo says that Apple plans to have four models in the 2022 iPhone lineup. Kuo had previously stated that the iPhone 13, destined for this year, will be the last iPhone lineup to feature a 5.4-inch...
Read Full Article • 96 comments