Late last week, CNET reported on a new trojan horse threat targeting Mac users. While the threat was initially discovered back in late July and had yet to become fully functional, only recently was the malware highlighted by antivirus companies targeting such threats. 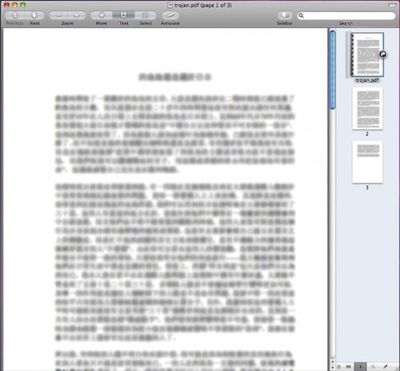 Blurred screenshot of PDF file deployed by OSX/Revir.A (Source: F-Secure)
The new threat consists of two parts, with the first being a trojan downloader known as "OSX/Revir.A" that serves to distract users by downloading and continually opening a PDF document containing "offensive political statements" written in Chinese. But the actual damage from OSX/Revir.A comes as it installs a backdoor known as OSX/Imuler.A to potentially allow malicious parties to access the user's machine.

The report noted that the malware did not appear to function properly due to a lack of instructions being delivered from a remote server, but malicious activity could still be possible.

Apple's battles with malware authors continue, however, as CNET discloses that another trojan horse, known as OSX/flashback.A, has been discovered. Like a similar threat that surfaced early last month, the new trojan masquerades as a Flash Player installer to trick users into installing the package.

Unlike the previous Flash Trojan (called Bash/QHost.WB), which changed one file on the system, this new Trojan is a bit more complex and first deactivates network security features, then installs a dyld library that will run and inject code into applications that the user is running. The Trojan will also try to send personal information and machine-specific information to remote servers.

Users requiring Adobe's Flash Player software are of course advised to download it directly from Adobe's site rather than attempting to install it from sites which may be trying to trick users into installing malware. If past history is any indication, Apple should quickly update its malware definitions to help recognize the new threat, alerting users to the known malicious nature of the package should they attempt to download and install it.

I'm wondering if I came across that second one yesterday. I pulled up a video and got a pop-up that looked very authentic asking me to update my Flash Player. I closed it without clicking anywhere within it, and nothing downloaded, but I may have dodged a bullet by not installing it. I consider myself a very educated Mac user, but even I might have been convinced if that was it, had I not been in a hurry and not willing to wait for it to install.


I installed a flash update yesterday, and after reading this article, it got me worried. So I checked the CNET article (http://reviews.cnet.com/8301-13727_7-20111639-263/another-os-x-trojan-imitates-adobe-flash-installer/) and they have screenshots of the fake and real flash installers. My mac is good... for now. :) 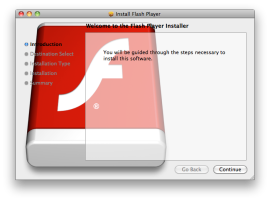 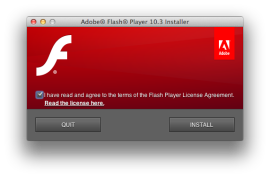 Dang it....that Apple specialist in the store told me mac is virus free when I was purchasing my MBP....wth....

Even the virus's have bugs :D

This is not a virus. It's a Trojan horse. They are two very different kinds of malware.
Score: 8 Votes (Like | Disagree)

Yes, I'm sure taking a copy of Flash and rewriting it to make it malicious is the fault of Adobe just as much as torrented copies of iWork may or may not have been rewritten to install malware is the fault of Apple.:rolleyes:
Score: 8 Votes (Like | Disagree)

Its good to see that apple actually update their os to stop this trojan threat. If only windows was as reliable...

Ahh good to see you're still clinging to the 10 year old idea of Windows and Microsoft.

Macs are being infected more because of all those stupid Windoze users who switched because of the "Mac vs PC" ads. Doh!

I do hope that was sarcasm, please say it was. If it wasn't I feel compelled to point out how wrong you are, Mac users are not smarter than PC users, nor are PC users smarter than Mac users. They are just computer users, no different from each other.
Score: 6 Votes (Like | Disagree)

Bottom line is Windows is now more secure then OS X. Take that to the bank!


OSX is obviously a very secure OS and so is Windows 7.
Score: 5 Votes (Like | Disagree)