VR-Zone.com reports on claims from Turkish site DonanimHaber suggesting that Intel will be releasing its high-end Sandy Bridge E processors on November 15th. While not addressed in the reports, server-class Xeon versions of those processors, which would be candidates for inclusion in an updated Mac Pro lineup, are likely to ship at the same time.

The Platform Launch is specified as Weeks 46-47, which covers November 14th to November 27th. However DonanimHaber inisist that the final release date is November 15th.

Several rumors had suggested that updated Mac Pro models might arrive in early August, despite that fact that no suitable processors were publicly known to be available for such a refresh. We noted last month that the rumored timeframe had come and gone without a release and reviewed Intel's roadmap that pegged suitable processors for a release during the fourth quarter of this year. 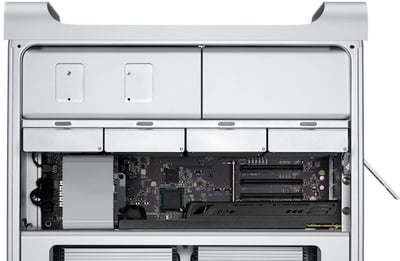 A November 15th launch for the processors certainly fits within that window, and opens the door for Apple to introduce new Mac Pros, which have been eagerly anticipated given that the line was last updated in July 2010. Apple has also been known to receive early access to Intel processors for certain machines, including Mac Pros, and thus it is possible that Apple could even introduce new Mac Pro models ahead of that date and give themselves a headstart on the end-of-year buying season.

MrCrowbar, what are you going on about?

Hope so. Oh wait, I forgot that the iToys are the future of computing. :rolleyes:


I hear you. Can you believe some people think content creators are going to work on an iPad. And they say that cloud computing will allow it all to happen. Yeah, I want to work on a 5Gig file over the internet. People need to live in the present.
Score: 13 Votes (Like | Disagree)

just to name a few i'm working with
Score: 12 Votes (Like | Disagree)

They still make those things?


Hope so. Oh wait, I forgot that the iToys are the future of computing. :rolleyes:
Score: 9 Votes (Like | Disagree)