Hardmac reports that Apple has made an internal announcement that it has completed work on tools that will allow support technicians to utilize remote diagnostics on iOS devices, receiving key information about device state. The report notes that the tools will allow Internet and telephone support staff to provide enhanced device support without customers having to bring their devices in to an Apple store or service center.

In effect, this systems operates entirely online. An email is sent to the device containing a URL (this can alsoo be entered by hand) and the device will connect via Mobile Safari and the telephone to start internal checks and sends the result of it to the Apple servers to which the service centres are connected.

As noted by AppleInsider, this tool sounds essentially identical to the existing iosdiags.apple.com site, which has been used for some time by Apple retail stores to wirelessly gather system information.

Currently, the Web application only works with an employee Apple ID and is not connected to an iTunes account. The data culled from the service reportedly provides an Apple Genius with the same information they would obtain plugging in an iPhone at the Genius Bar with a USB cable.

The system was said to have been put in place to make it easier to conduct mobile appointments away from the Genius Bar, in an effort to make it less crowded, AppleInsider was told. Using this tool in-store allows an employee to access diagnostic information wirelessly and quickly.

That iOS diagnostic functionality has been around for quite some time, first appearing as an OS X application for Geniuses known as Behavior Scan and used to read diagnostic information from devices connected via USB. That functionality later made its way to iOS in the form of the hidden iOS Diagnostics application, documented in our forums a year ago. 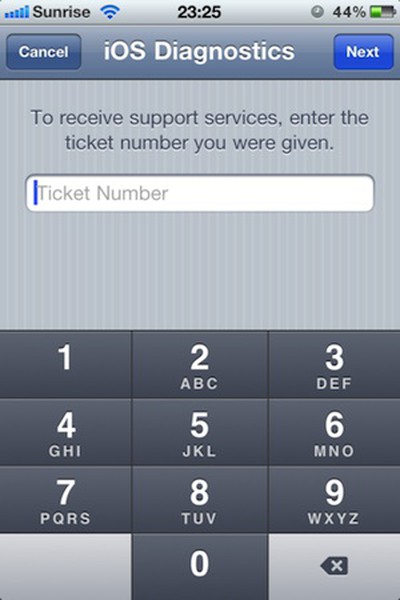 One of our retail contacts has told us that the iOS Diagnostics feature is currently not widely used in retail stores, as it is generally faster and easier to simply plug the device in at the Genius Bar. But it appears that Apple may finally be preparing to officially expand the remote diagnostics to allow users to take advantage of it upon direction from an Apple support agent. The expansion would offer a new method for remote support staff to receive information directly from a device rather than relying on the user to accurately track down and report the relevant details.


Sounds like if you use this when you have a jailbroken phone, you're an idiot.
Score: 17 Votes (Like | Disagree)


Sounds like you shouldn't expect them to service a product you fundamentally altered. Does MS answer Adobe's support calls? Does HP service your Dell?
Score: 3 Votes (Like | Disagree)

I hope this is introduction of the remote diagnostic tool is the beginning of a trend that eventually allows for native VNC of iOS.
While the iPhone Configuration Utility is useful, important support usually needs to be done while a user is mobile. A FaceTime like acceptance screen could manage VNC requests and I could see an orange floating bar (like the green one while in a call) at the top of the screen to indicate to the host user that their iPhone is being controlled.
Also, I bet enterprise IT departments will at some point get access to the diagnostic tool.
In any case, this seems like a good step towards managing iPhones in the field.
Score: 2 Votes (Like | Disagree)


I swear that if Apple announced they were giving everyone in North America a free MacBook Air; a tasty chicken sandwich; and a case of Pepsi - within five minutes there'd be some fool on here whining that they were discriminating against vegetarians, promoting childhood obesity, or advocating socialism.

Several thrillion dollars of electronic infrastructure; billions of man-hours of scientific and engineering labor; and the fruits of two thousand years of scientific discovery have given us the Internet. A tool that allows some people to moan, ad nauseum, to an unwilling audience located in every corner of God's Green Earth.
Score: 1 Votes (Like | Disagree)

fishmoose
It is beyond stupid to assume Apple would develop tools for support just to detect a jailbreak, believe it or not - but Apple really isn't that obsessed with teenagers hacking their phones and pirating apps...

They make support tools to faster diagnose their products and thus save money on cutting down time spent on a device.
Score: 1 Votes (Like | Disagree)

iExpensive
I guess it's cool :o
Score: 1 Votes (Like | Disagree)
Read All Comments

Friday July 30, 2021 9:04 am PDT by Sami Fathi
Tesla CEO Elon Musk reportedly once demanded that he be made Apple CEO in a brief discussion of a potential acquisition with Apple's current CEO, Tim Cook. The claim comes in a new book titled "Power Play: Tesla, Elon Musk and the Bet of the Century," as reviewed by The Los Angeles Times. According to the book, during a 2016 phone call between Musk and Cook that touched on the possibility of ...
Read Full Article • 178 comments