CNet reports that Apple has finally contacted Carl Frega about a prototype laptop that he had put on sale earlier this month. The laptop appeared for sale on eBay where it received bids upwards of $70,000 before it was pulled at the request of Apple.

The 2007-era MacBook Pro featured a Magsafe Antenna and SIM slot that suggested it was an early prototype of a 3G-capable Apple laptop. CNet reports that Frega was contacted by Apple this afternoon to have someone pick it up. 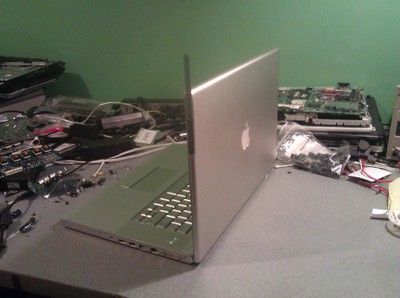 It seems the laptop had a strange journey before ending up in Frega's hands. He originally picked up the machine off someone on Craigslist. He repaired the machine and tried selling it again on Craigslist. The new owner brought the machine to an Apple Store Genius Bar, where the machine was opened and determined to have non-standard parts. The repair invoice describes the reason they refused repair.

Opened machine to observe that nearly every internal part was 3rd party; main logic board, optical drive, display, hard drive, top case, and others. Machine number (W8707003Y53) is also not recognized as a valid number.
Proposed Resolution: Denied services; machine has been modified by unauthorized providers beyond repair."

As a result of these "3rd party" parts, Apple's store refused service. That second buyer took Frega to small claims court thinking the machine was a fake, after which Frega had to accept the machine back and refund the money. It was only after that that Frega tried to sell the laptop on eBay.

Due to the publicity surrounding the eBay sale, Apple has contacted Frega and asked to set up a time to pick up the machine. No word on when it is expected to be returned to Apple.

AIP5
Definitely the funniest part about this is that the Apple Store thought it was modified by a third party... haha, how did they not see that antenna.. or did they write it off as a 3rd party modification too?

evilroot
For those who haven't seen the previous threads: I'm Carl Frega, heh.


I had actually been talking to Cnet all week, since the writer found the full backstory (especially the small claims part) interesting. He asked me if he could publish it, and I asked him to wait until I had heard something from Apple. Despite all my attempts I never did, so I finally said sure go ahead.

Then did Apple contact me . . . . directly, by phone. Quite possibly because Cnet contacted Apple PR to ask for comment before publishing. Their representative was very pleasant and polite actually, and we chatted for a while. He promised to call me back an hour later with a resolution. When he did they wanted to send an agent from Charlotte directly to me to recover the laptop immediately, tonight, and I didn't feel comfortable with that. Not based only on a phone call, with nothing at all in writing, and in the middle of the night (by the time they would reach Raleigh).

I said I needed to consult my lawyer, since I had promised I would do so before taking any action regarding the machine, and that we will take the matter back up first thing in the morning. I'll let him handle the matter from here rather than dealing with Apple directly, and hopefully everyone will be happy with the outcome. I actually rather like Apple and their products, so try not to bash too much guys! They haven't really done anything wrong at this point.
Score: 26 Votes (Like | Disagree)

Theclamshell
Will apple even pay him or just bully him and take it. if I had it and they were just going to take it I would disassemble it and photograph every piece to put on the internet.
Score: 26 Votes (Like | Disagree)

andrewlgm
How much is apple paying him for it?
Score: 24 Votes (Like | Disagree)

I hope he remembers that possession is 9/10th of the law and asks for a finders fee just under what the legal fees would be for Apple to sue him for it. I'm thinking $10K would be a good price to end it quickly.
Score: 23 Votes (Like | Disagree)

They can certainly afford this and he has established it's value on the open market.

This would also make for a nice first public relations move for the new CEO.
Score: 22 Votes (Like | Disagree)
Read All Comments

Wednesday June 23, 2021 5:07 am PDT by Sami Fathi
Apple earlier today published a detailed report outlining in blatant terms the negative impact that sideloading would have on the iPhone and iPad, specifically calling out the impacts it would have on user privacy and security. Now, the company is continuing its PR push, with an executive noting in an interview that users who wish to sideload apps already have that option thanks to other...
Read Full Article • 398 comments