Last week, we noted that a Dutch court was weighing an infringement claim by Apple against Samsung over the Galaxy line of smartphones and tablets, with Apple requesting a complete ban on the sale of Samsungs products in the European Union. A decision in that case was to be handed down on September 15th.

FOSS Patents and Tweakers.net [Google translation] now report that the case has been decided ahead of that timeline, with the judge ordering that Samsung's subsidiaries be banned from selling Galaxy smartphones (but not tablets) in many European Union countries as of October 13th. The ban applies to the Samsung Galaxy S, Galaxy S II, and Ace phones. 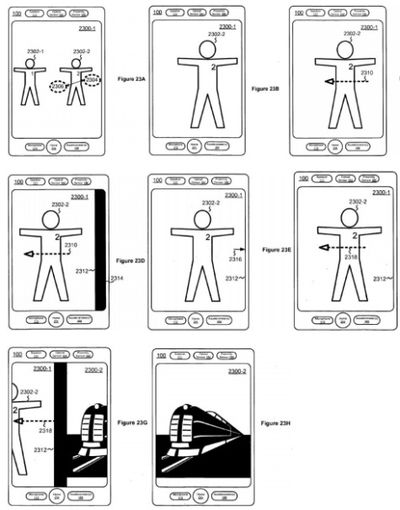 Figures from Apple's photo-swiping patent judged infringed upon by Samsung
The judge's decision was relatively narrow compared to the claims brought by Apple, which included a number of assertions that Samsung had copied Apple's product designs and functionality. The judge rejected most of those claims, finding only that Samsung had violated an Apple patent related to using swiping gestures to switch between photos in a gallery application. The ban will apply in any country where that specific patent is valid, although documentation suggests that the patent has lapsed in a number of countries due to a failure by Apple to provide necessary documents or fees.
[ 620 comments ]

needsmoar
I swipe my butt after i go for a #2, should I be concerned?
Score: 39 Votes (Like | Disagree)

Xil3
Yeah, it's pretty pathetic that they're doing this. This is not good at all for the consumers - I actually wanted to buy a Galaxy S2.

This is totally anti-competitive behavior. I love your products Apple, but I'm really starting to hate you as a company.
Score: 26 Votes (Like | Disagree)

cotak
Next in the news, iphone and ipad shortage due to "production issues" at samsung's chip fabs.
Score: 24 Votes (Like | Disagree)

kalsta
Should we be concerned by this guy's photo library? If I'm not mistaken, we have a photo of two people strapped to the ground in the first photo, and an oncoming train in the second.

Well, creepy patent pics aside, I have to say this is getting pretty silly. How different is swiping left and right to scrolling up and down? Enough to award a patent and ban the sale of phones? Seriously??
Score: 21 Votes (Like | Disagree)

I'm not certain that I understand the objection to protecting one's patents. If you invent something, whether or not everything thinks that it's great and, in hindsight, obvious, why should you not have the opportunity to get credit, income, and rights to your work?

If every invention and concept becomes eminent public domain, what incentive does anyone have to invent anything in a capitalist market economy? If Apple invents an iPad and then everyone hops onboard it's knockoff clone Andriod products and, by doing so, these clone companies devalue the iPad and it's creation, what incentive does Apple have, to pour money into whatever will replace the concept of the iPad? If what you want is an iPad, give your money to Apple who invented it. Not to the companies that have nakedly cloned it.

Furthermore, why wasn't this a problem with the iPod? Different companies came up with different competitive designs and had an equal opportunity to compete with Apple's innovative music and media device.

While there devices that resembled the iPod more closely than others, it would not be credible to claim that anyone copied the iPod as closely as the Galaxy-Andriod tablets infringe on Apple's iPad.

I support Apple's rights to protect their invention and the rewards reaped through their innovation.
Score: 18 Votes (Like | Disagree)
Read All Comments