One of the most popular long-standing rumors regarding Apple's future product plans has centered around television sets. Several analysts have been strong proponents of the idea that Apple is working such a product, and unreliable Australian site Smarthouse reported last month that Apple had been rumored to be in discussions with LG about producing a panel for a 55-inch TV based on organic light emitting diode (OLED) technology. 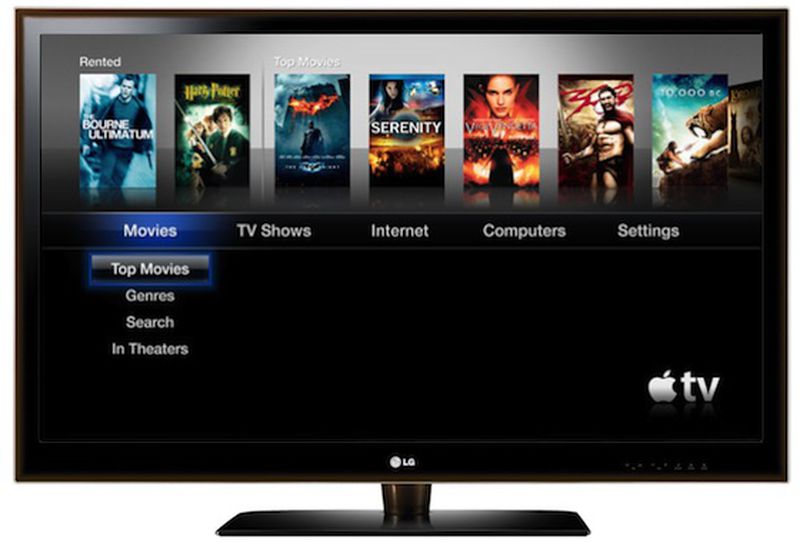 The Korea Times now reports (via The Next Web) that no such deal is in place.

“It’s true that Apple has keen interest in TV, allowing users to stream music, videos and TV shows via iTunes, though that needs some iPhone and iPad integration, however, Apple is still pessimistic about using OLED displays,” said one source.

“Because Apple is worried over higher costs and technology-related issues linking to large-sized OLED displays, it is groundless that Apple has asked LG Display to supply its OLED screens for its upcoming televisions,” added the source.

Sources for the report have indicated that Apple is likely to stick with more proven LCD technologies for any such television products, and has continued to shun OLED technology even for its smaller devices. In fact, Apple has shown no signs of moving toward OLED technology even looking out several years into the future.

“Apple has no interest in using OLED screens on its popular devices. The upcoming iPad 3 will also adopt picture quality-enhanced LCD screens, while the next iPhone will follow suit. Three or four more years will be needed to see OLED-embedded digital devices from Apple,” said a top-level executive from one of Apple’s suppliers.

Apple has long dabbled in the television market with the Apple TV, but continues to refer to the set-top box as a "hobby" even as it has tweaked the device to focus on streaming content from both the iTunes Store and users' computers and iOS devices. The company has reportedly been interested in offering more television content, perhaps in the form of "best of TV" subscription packages through the iTunes Store, but has expressed frustration with fragmentation in the industry and the stranglehold cable companies have over the user experience with their own set-top boxes.

Apple: A day late and a dollar short


I'm not sure how this applies to Apple.
Score: 8 Votes (Like | Disagree)

Hastings101
I think my Samsung Focus has something similar to that, I think it looks great. Not sure why Apple would be against it.
Score: 6 Votes (Like | Disagree)

Yes, oled technology is far from mainstream, the only evice i can think of that has that type of display is the zune hd

Samsung has used it in a number of phones, see Super AMOLED. Having played around with one of them (the Samsung Galaxy S Captivate), the screen is really just stunning, miles beyond what normal LCD provides.

I think my Samsung Focus has something similar to that, I think it looks great. Not sure why Apple would be against it.

There's a very good reason : Samsung is the only supplier making SAMOLED screens right now and the yields are low. So much so, that all 3rd party vendors that were planning on using SAMOLED switched to SuperLCD since Samsung refused to ship out screens to them, preferring to use them in their own mobile division.

Considering the number of units Apple needs, it doesn't make sense to tie themselves to Samsung over this and not be able to produce nearly enough units to ship out to consumers.

Haha soooo Apple is avoiding OLED just like they avoid Blu-ray? I mean both are technically much better!


Especially considering Super AMOLED is supposed to fix the sunlight glare issues of previous OLED and AMOLED screens. Now I didn't get to play with the phone outside in sunlight (it was the phone of some guy I knew and we were indoors in a restaurant) so I can't confirm the performance for that scenario, but really, the black and colors were much better than what I've seen even from IPS displays.
Score: 4 Votes (Like | Disagree)

How many television manufactures also own the most popular online content and application distribution network in the world?

Tuesday March 31, 2020 10:22 am PDT by Juli Clover
Apple has acquired weather app Dark Sky, Dark Sky's developers announced today. Dark Sky is one of the most popular weather apps on the App Store, known for its accuracy and storm warnings. Our goal has always been to provide the world with the best weather information possible, to help as many people as we can stay dry and safe, and to do so in a way that respects your privacy. There is no ...
Read Full Article • 198 comments