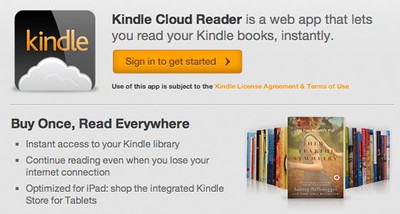 As noted by TechCrunch, the new system is already live at http://read.amazon.com and works quite well on the iPad:

The iPad version is especially good because the store is fully optimized for the device. And you can easily switch back and forth between the store and your own library. It feels like a native app, but it’s not.

The web app even supports local storage so that you can read your Kindle books even without a web connection.

Apple has been at odds with many content providers after implementing their new subscription rules preventing native iOS app publishers from selling content outside of Apple's own in-app system. Amazon complied with the rules by removing the Kindle Store button from their native application, but for the iPad now has this web-based option that does directly integrate with their sales system.

Stuff like this shows how useful HTML5 can be. I'm pleased to see things like this myself, great work from Amazon.

Looking forward to see more things like this powered by HTML5.

Since it's HTML5, it's a bit like Amazon beat Apple at their own game with this. :D

And it really does serve Apple right for the terms they enacted. It's also a good move should Apple decide to become even more anti-competitive with their App Store terms.
Score: 21 Votes (Like | Disagree)

A big corporation exploits the little guy, and the whole world cheers?


Neither of these companies are "Little Guys"

the only exploitation has been on Apples part. Milking everyone with their stupid App store rules.
Too greedy and that is why Amazon did this.

Westside guy
Seems like a pretty brilliant use of the latest HTML5 technologies (especially with the off-line functionality). The obvious benefit, as mentioned, would be getting around Apple's "give us 30% of the price for in-app purchases" rule; but it would seem to have other advantages as well. If Apple chose to dramatically change the API in a future release of iOS - or if Google did the same with Android, for that matter - Amazon wouldn't have to break a sweat. Kindle users would continue to have full access to their books on the iPad with no extra effort or feverish overtime work by their programers to update. It's not as if Apple or Google can remove HTML5 functionality without repercussions...
Score: 11 Votes (Like | Disagree)

KnightWRX
A lot of the scrap on the iOS app store would be much better done as web apps. Much more universal, much less of a pain to develop for the developers and also would help with the crowding in the app store.

Let's face it, many of the apps are just document viewers or smallish databases. The problem is with the "gold rush", everyone went native, destroying basically 10 years of moving stuff to the Web where it fit gracefully. The 80s and 90s was where boxed software was the rage, where you had to install it locally. The late 90s brought us rich web applications where server-side dynamically generated HTML technologies the likes of J2EE and other, simpler stacks.

HTML5 solves a lot of the issues we had client side (offline storage, richer UIs) and moving forward, a lot of apps just make sense as webapps.
Score: 9 Votes (Like | Disagree)

tigres
How about them apples, Apple?
Score: 9 Votes (Like | Disagree)

This is funny and ironic seeing as Apple originally only wanted web based Apps with the original iPhone.
Score: 9 Votes (Like | Disagree)
Read All Comments

Friday June 18, 2021 9:41 am PDT by Sami Fathi
After a long wait, YouTube for iOS is officially gaining picture-in-picture support, allowing all users, non-premium and premium subscribers, to close the YouTube app and continue watching their video in a small pop-up window. In a statement to MacRumors, YouTube says that picture-in-picture is currently rolling out to all premium subscribers on iOS and that a larger rollout to all US iOS...
Read Full Article • 135 comments