Following reports that The Wall Street Journal and eBook company Kobo have pulled direct content sales from their iOS apps in order to comply with Apple's new rules regarding in-app subscriptions and purchases, Amazon has followed suit with an update to its Kindle app for iOS.

- This update removes the Kindle Store button from the app.

While the Kindle app has always redirected users to a Safari web app for purchasing, it has until now prominently featured a button to allow users to quickly navigate to the store from the app. Users will now have to manually load the store in Safari when they wish to purchase new content. 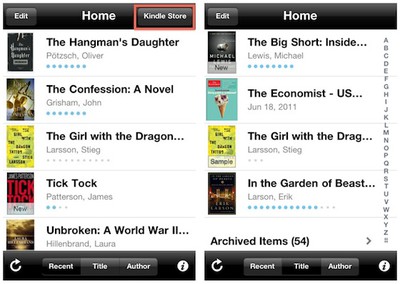 Given the number of apps that have been updated or removed to address Apple's in-app subscription and purchases policy, it certainly appears that Apple has finally closed the door and begun enforcing the new rules that were to have gone into effect on June 30th.

You can read any NOOK Book you have purchased on this updated NOOK for iPhone app, however the Shop link has been removed so to buy NOOK Books from your iPhone, open your Safari browser and go to nookbooks.com.

roadbloc
Happy now Apple? So much for ease of use. This is pathetic. :rolleyes:
Score: 52 Votes (Like | Disagree)

kenypowa
Thanks Apple. You sure provide excellent "user friendly" features. You don't even get your ridiculous 30% cut.

bushido
stupid really stupid apple, dont be so nitpicking all the time
Score: 16 Votes (Like | Disagree)

Since there have been over 200 million iOS devices sold, Amazon (and others) have the potential to reach a far greater audience. This is all possible because of the platform that Apple built. Why then, should Amazon be allowed to profit on this platform without paying "rent"?

Can we drop the "rent" thing ? Apple wouldn't have sold those 200 million iOS devices with Safari alone, it's things like Kindle, the iOS games, Google apps, Netflix and others that make them worthwhile. It works both ways, as such, developers owe nothing to Apple beyond the 99$/year and 30% of the app's price. Apple has no grounds to force IAP/IAS on 3rd parties that don't require such a payment processing service.
Score: 14 Votes (Like | Disagree)

diamond.g
Is everyone here that has the app, just going to update?

I plan on holding on to the version that I have, with the button...
Score: 13 Votes (Like | Disagree)

Since there have been over 200 million iOS devices sold, Amazon (and others) have the potential to reach a far greater audience. This is all possible because of the platform that Apple built. Why then, should Amazon be allowed to profit on this platform without paying "rent"?


Because Apple don't want their customers to have this experience: "Wow! This is so much easier on Android!" :)
Score: 11 Votes (Like | Disagree)
Read All Comments