A couple of weeks ago, we noted that Apple was apparently set to open over 30 new retail stores over the following two months, pushing the company's total to over 360 by the end of September. While Apple has opened a couple of stores since that time, including a new Glendale, California store just 500 feet from an existing location, things now appear to be getting into full swing with Apple apparently set to open at least five new stores this Saturday. 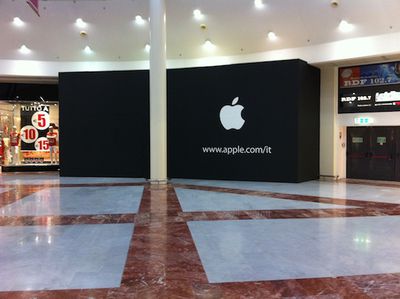 - Southland (Cheltenham, Victoria, Australia): The new store is Apple's third location in the Melbourne area and its twelfth overall for Australia.

- Conestoga: (Waterloo, Ontario, Canada): Apple's 20th retail store in Canada, the new location is also notable for its placement in the hometown of smartphone competitor Research in Motion.

- I Gigli: (Florence, Italy): The new store is Apple's sixth location in Italy and first in the Florence area, filling a gap between the company's store in Rome and a series of stores in northern Italy across the Turin, Milan, and Bergamo.

The new openings come as Apple continues to push forward with construction on a number of other stores, as well as renovations and expansions of some of its existing stores. The company is also notably undertaking an upgrade of the plaza and glass cube at its flagship Fifth Avenue store in Manhattan. Earlier today, we reported that Apple has released details on the cube's revamp, which will see the original design of 90 panes of glass replaced with a new version using only 15 panes of seamless glass.

Cinerama
My nearest  Store just got 2500 miles closer!!. Have been looking forward to them opening in Anchorage. ;)
Score: 4 Votes (Like | Disagree)

mbarriault
Conestoga on Saturday? One word:

I was tired of having to drive to Mississauga.
Score: 4 Votes (Like | Disagree)

Lindberg
Why not open one in Denmark? The closest Apple Store is in Hamburg, Germany and that is pretty far away... :(
Score: 3 Votes (Like | Disagree)

*LTD*
Given how insane the demand is for Apple gear, the more Stores the merrier.
Score: 2 Votes (Like | Disagree)

Why not open one in Denmark? The closest Apple Store is in Hamburg, Germany and that is pretty far away... :(

Thursday December 8, 2022 2:45 am PST by Sami Fathi
Apple yesterday announced that end-to-end encryption is coming to even more sensitive types of iCloud data, including device backups, messages, photos, and more, meeting the longstanding demand of both users and privacy groups who have rallied for the company to take the significant step forward in user privacy. iCloud end-to-end encryption, or what Apple calls "Advanced Data Protection,"...
Read Full Article • 144 comments

Thursday December 8, 2022 7:05 am PST by Joe Rossignol
iOS 16.2 is expected to be released next week following nearly two months of beta testing. With last-minute additions like Apple Music Sing and Advanced Data Protection, the software update now has over a dozen new features for the iPhone. Below, we've recapped many of the new features coming with iOS 16.2, including Apple's new whiteboard app Freeform, two new Lock Screen widgets, the...
Read Full Article • 82 comments