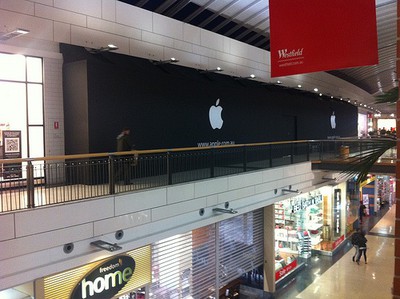 Apple Store in Penrith, Australia (Source: Flickr)
In association with the opening of Apple's new Penrith store outside of Sydney, Australia this weekend, Current.com.au reports (via The Next Web) that Apple press representatives have apparently noted that the company is planning to open a remarkable 33 stores over the next two months. With the retail push, Apple will move from its current total of 330 locations to 363 stores by the end of fiscal 2011 in late September, a pace that works out to nearly one opening every two days. According to the Apple spokesperson:

"Our retail offering continues to [grow], with Penrith the 11th store in Australia, since we opened Apple Store Sydney just three years ago. Globally we are planning to have 363 stores in fiscal 2011.”

The report also notes that Apple's retail stores have now seen over one billion visitors pass through their doors.

"Apple Retail has been in business for 10 years. During this period, we have had over 1 billion visitors through our doors, many of whom are new to the Mac, as the Apple Store is the best place to learn about all the latest products from Apple," said the spokesperson.

sparkie7
how about one in central Melbourne city? :rolleyes:
Score: 3 Votes (Like | Disagree)

JAT
Just please don't put up a sign announcing how many visitors:

smali
Going into Apple stores makes me want to buy mac products I already own.

Churches should hire the same architects, might get a few more asses on those empty seats.
Score: 2 Votes (Like | Disagree)
Read All Comments