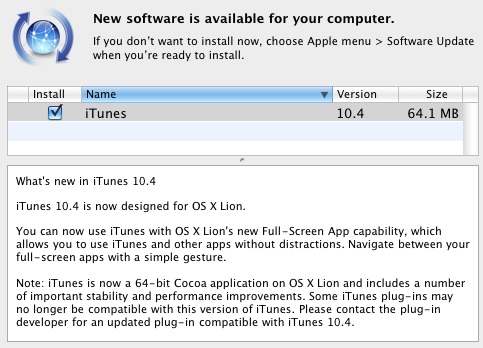 You can now use iTunes with OS X Lion's new Full-Screen App capability, which allows you to use iTunes and other apps without distractions. Navigate between your full-screen apps with a simple gesture.

Note: iTunes is now a 64-bit Cocoa application on OS X Lion and includes a number of important stability and performance improvements. Some iTunes plug-ins may no longer be compatible with this version of iTunes. Please contact the plug-in developer for an updated plug-in compatible with iTunes 10.4.

After WWDC last month, Apple released a beta of iTunes 10.5 that was 64-bit, but it seems we don't have to wait for 10.5 to take advantage of the feature:

The primary advantage afforded 64-bit applications is the ability to address more than 4GB of memory which can be a distinct advantage for applications which use large data sets. Adobe, for example, received some criticism in 2008 that their Photoshop products were slow to adopt 64-bit mode on the Mac. 64-bit Photoshop for Mac ultimately arrived with CS5.

The reason for the long delay was the fact that Apple dropped support for 64-bit mode in Carbon back in 2007, requiring developers to port their existing Carbon applications to Cocoa in order to take advantage of 64-bit mode. This primarily affected older applications such as Photoshop and iTunes which had existed prior to Mac OS X and were still using Carbon, Apple's legacy API. Meanwhile, Cocoa was Apple's native API for Mac OS X and offered some additional user interface advantages. For better or worse, many users saw Cocoa applications as superior to their Carbon counterparts due to historic baggage of many of the Carbon applications.


It's not just about the cost of Lion.

A lot of people won't be able to upgrade straight away because software and/or peripherals which they rely on won't work with Lion.
Rating: 12 Votes

scottishwildcat
Who on earth needs to run iTunes full screen or "without distractions"? If there's one Apple app that's designed to be shoved into the background while it's being used, surely it's iTunes.
Rating: 12 Votes

Wilson1313
FINALLY 64 bit!! And also they moved the close/minimize/expand back to a horizontal orientation again :D
Rating: 12 Votes

ratpH1nk
What about us poor folks on Leopard?

Life is tight on a resident budget (especially with a family), and you would be surprised how well a DP G5 Mac still runs :/
Rating: 9 Votes

ZACHAR1AH
Cocoa... took long enough. Apple is so far ahead... but so far behind.
Rating: 9 Votes

took them long enough but typical Apple they do block support for older OS.

Does this mean that they are more or less forcing you to upgrade to lion.

nagromme
I would have bet money that iTunes would not see a Cocoa rewrite without a badly-needed UI re-do from the ground up. (Seriously, those non-sizable-scrolling panes-within-panes for iPod/iOS devices? Those would be frowned upon even in a web site, much less an app!)

Who on earth needs to run iTunes full screen or "without distractions"? If there's one Apple app that's designed to be shoved into the background while it's being used, surely it's iTunes.


You can still run iTunes in the background, and the keyboard buttons will still control it.

But what about when you’re organizing your massive library? Making playlists and updating tags? Viewing tons of columns of metadata? The best thing about iTunes is its sheer power and flexibility, and when you’re using those tools, your needs are different from simple playback. I often maximize iTunes as close to full-screen as possible on my 24” display. I can see why having a fullscreen option is nice. Those who don’t need it will just ignore it.
Rating: 6 Votes

On a remotely related note...so if the day ever comes that Apple lets us read our iBooks on our Mac would that come in the form of an iTunes update or an iBooks app in the Mac App Store?


I would hope an iBooks app, like on iOS. iTunes is already bloated enough.
Rating: 6 Votes